This project has been completed under the direction of Peace Corps Volunteer Jesse Coker. To read about the beginning of the project, CLICK HERE. 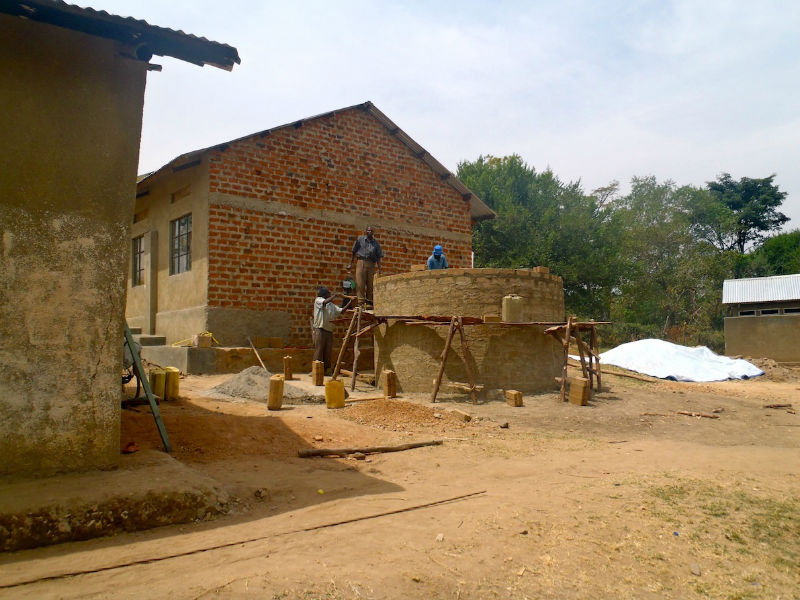 This project was to build a 20,000 liter water tank at the school.

We have completed our water tank! The project went very well, with the kids always eager to watch the process from start to finish.

Before the tank construction had begun, we consulted with the customer about tank placement, size, usage, and management. After finalizing and receiving a deposit, we collected the materials needed for brick making (sand, subsoil, and cement) and foundation laying (aggregate and larger rocks). We also took a trip to town for the materials we needed to purchase (wire mesh, iron bars, cement, etc.). Then we were ready to begin.

Brick making is a fairly simple process of mixing the sifted subsoil with the right amount of cement (5-10% of total mixture), and compressing the mix in our machine. One bag of cement will produce between 100 and 120 bricks. The bricks weigh about 25 pounds each.

After the bricks are made, they need to cure for at least two days before they are used. About a quarter of the bricks that we make need to be made with an insert so that the interlock is deeper and can receive an iron bar every third course for improving the holding strength of the tanks.

As some of the workers were making bricks, others were digging the foundation and filling it first with large foundation rocks. The next day, a mix of cement and aggregate was poured into the rocks, about 18 inches deep. 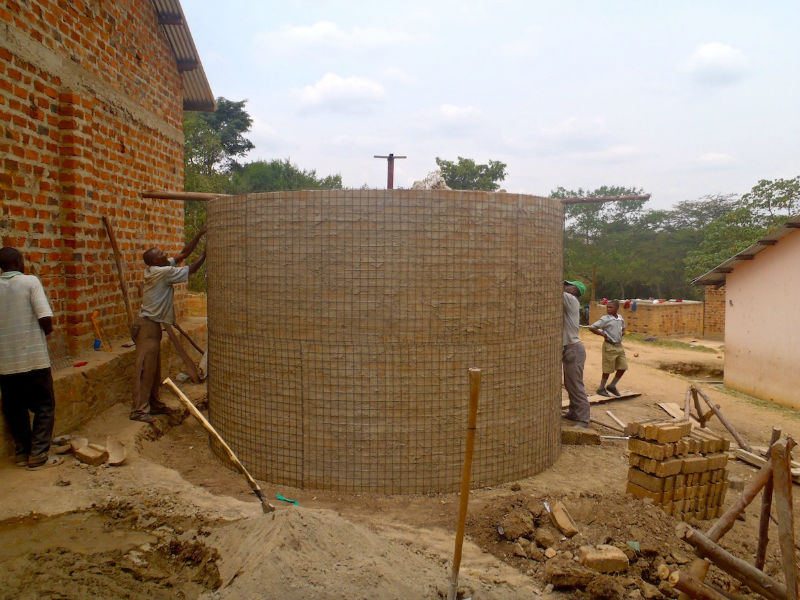 A day after setting the foundation, the brick coursework began. Obviously, the diameter of the circle differs with tank size, and with our 20,000 Liter capacity this meant a diameter of eleven feet and a height of approximately eight feet. I think the tank is slightly larger than we agreed on.

Bricks were laid as level as possible, with between five and ten centimeters of cement separating the courses. This was challenging to convince the builders to follow, as they are used to building with traditional bricks, which require much more cement because of their lack of strength and uniformity. For this particular tank, we laid 22 courses of 38 bricks each.

After the coursework was complete, the inside of the tank was lined with chicken wire and then plastered with waterproof cement. A metallic support pipe was also positioned so as to support the roof when built.

After plastering, the workers moved to the outside of the tank and wrapped the outside with connected sheets of heavy-duty wire mesh. This is another step that reinforces the holding strength of the tanks.

More plastering was done on top of the wire mesh, and more bricks were laid at the base of the tank to act as a veranda. This serves as protection from water runoff.

The tap area was dug out also, with a drainage pipe laid underground for eight feet, leading to some rocks for proper drainage into the soil.

When plastering was finished, the work moved to the roof. Iron bars were crisscrossed back and forth and a thick plastic liner was placed underneath the bars. Wire mesh and chicken wire were also placed atop the bars in order to hold the cement to be subsequently applied.

Holes were created for gutters to enter and to access the inside of the tank for periodic cleaning. A rough cast of cement was sprayed to prevent cracking of the cement as it dries. Finally, the cover was placed on top of the roof to prevent sunlight, animals, and other debris from spoiling water quality.

This completed our tank construction process. Our first customer, Sya Bright Future Primary School, is thrilled with the job we have done.

Our team of builders is gaining new skills as they become more and more familiar with this methodology, and is planning new projects.

The school has been very appreciative to me, and asked me to thank you also.

We, in turn, are grateful to Jesse for completing this terrific project, which hopefully will act as a model for future projects to come. 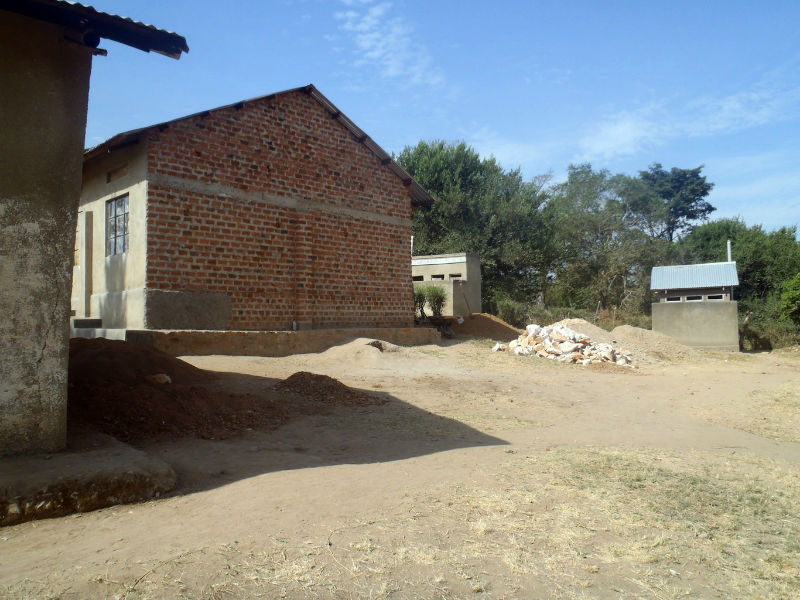 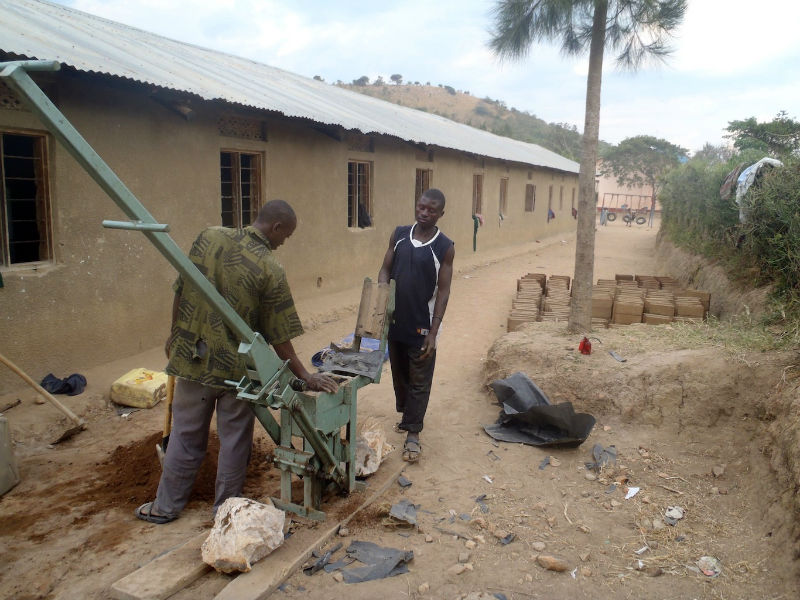 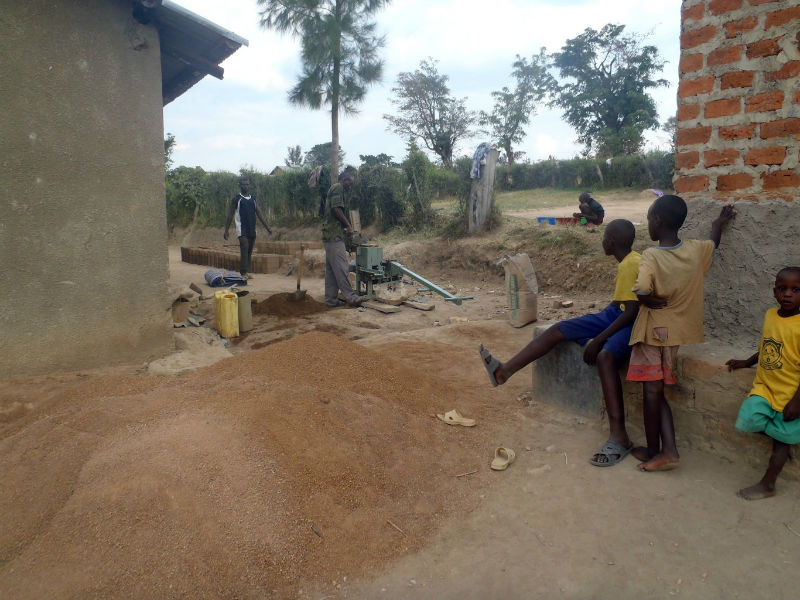 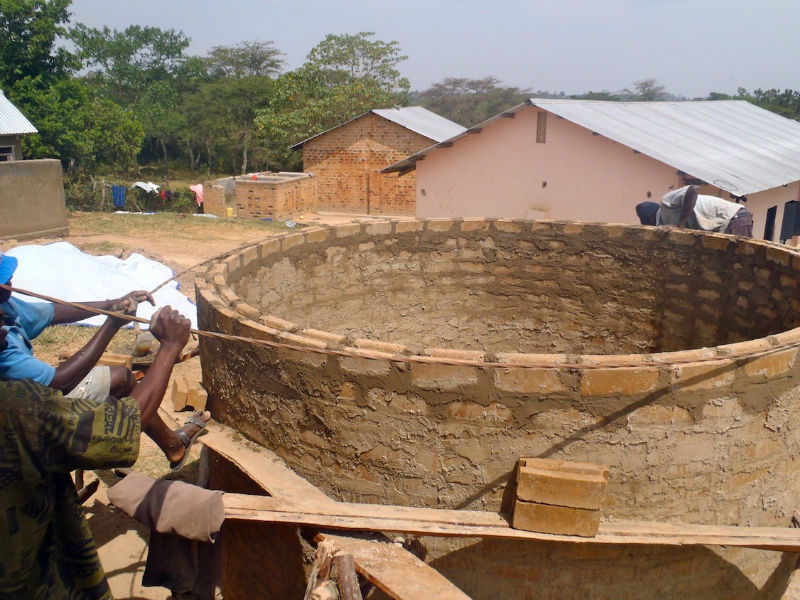