This project has been completed under the direction of Peace Corps Volunteer Kevin Werner.

The project was to build a new capture dam to supply water for the community.

The residents of Suretka de Talamanca can sleep a little easier this upcoming rainy season knowing that their aqueduct’s new capture dam will provide a reliable source of water even through heavy rains and flooding. In addition, the town will now have increased water pressure filling their tanks faster while helping to prevent water shortages.

Work on the aqueduct was advertised by the local Water Board which used word-of-mouth and put up posters in several local businesses. A day of preparatory work was needed before we could begin setting the rebar framework of the tank and laying cement. This mainly entailed using machetes and a chainsaw to clear the three kilometer trail of trees and other plant growth.

On February 22nd, I was pleasantly surprised to see a total gathering of around 25 community members who came out to lend a hand. Without access to a tractor, we hired a farmer and his horse to take the bags of cement halfway up the trail until it became impassable for the horse and the volunteers were able to take them the last 1.5 km to the construction area. It would’ve been hard to find a more appropriate piece of technology than this trusty horse. 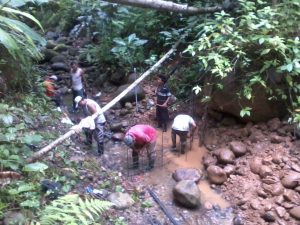 One group of volunteers hauled bags of sand and cement up the trail for hours while another group was busy clearing the stream of large rocks, setting the rebar and wood framework of the new capture dam, and eventually mixing and laying cement.

Meanwhile, back in town, a small group of community members prepared a lunch for everyone consisting of “arroz con pollo” wrapped in banana leaves.

After five days of carefully pouring cement and diverting the stream, the capture dam was dried and finished. Nicasio, a local in charge of maintaining the aqueduct, and I hiked up to the capture dam one last time with brooms in hand on a rainy March morning to prepare the tank for use with its first cleaning.

Many community members expressed amazement at the simplicity, yet size, of their town’s aqueduct. While most people in Suretka are familiar with the two large tanks where their water is stored, few have hiked up to this secluded, yet beautiful point on the mountain stream where it actually originates. Having many of these younger volunteers involved in the process has elevated their interest in critical community volunteerism and will surely ease the process of attracting support for future projects.

Last but not least, I hope the next time they turn on a faucet in Suretka they feel a little pride at seeing clean water come out, knowing they helped make it happen.

I’d like to extend my gratitude to Appropriate Projects and all of my family members and friends who supported the project for helping make a difference here in Costa Rica.

We at Water Charity would in turn like to extend our thanks to Kevin for completing this remarkable project, and to Kevin’s friends and family for donating to make it possible. 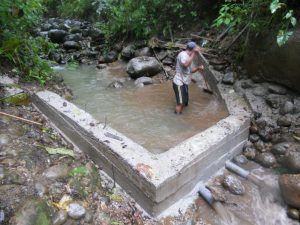