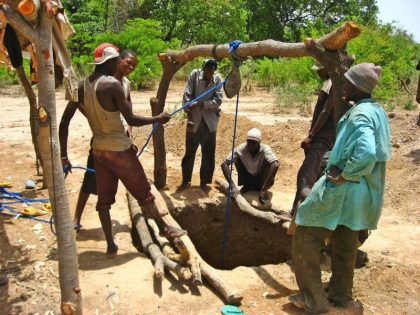 This project has been completed under the direction of Peace Corps Volunteer Owen Fitzgerald. To read about the beginning of the project, CLICK HERE.

The project was to construct a large diameter community deep well.

I have great news to share in that the construction of our deep well has been completed. The villagers are truly thrilled that they now have a deep well in the village, filled with water. This new well is the only one with water in the entire village. 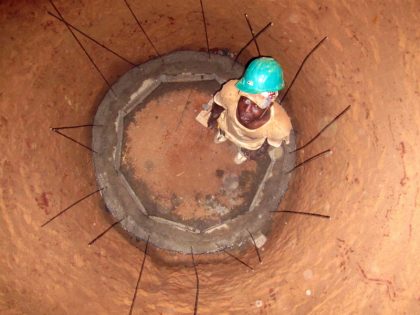 The villagers of Socourani began digging the well back in May 2010 and were hoping to finish it before the rainy/farming season started. At that time, we even began, one-by-one, making the special well bricks called “Dutch bricks” that would be placed in the well to support the walls. Although, since we are digging this large diameter well by hand (approximately 2 meters in diameter) and the fact that the water table is very low in our area, we were unable to achieve the aggressive goal of finishing early.

Once the rainy season was in full swing, the digging of the well was put on hold for two primary reasons. First, all of the villagers who are digging the well are sustenance farmers and had to head to their fields to begin cultivating. Second, the rainy season is not really an appropriate time to dig as the water level rises and the proper well water-depth cannot be known and/or achieved. Before putting the well project on hold, the villagers were able to achieve a depth of 8.5 meters (about 28 feet). 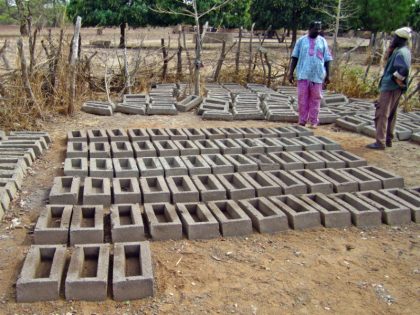 Since the villagers of Socourani harvest a good amount of cotton through December, it wasn’t until the cotton harvest finished up that they resumed brick making. Fast-forwarding a month or so, once the bulk of the bricks were made and the water level dropped, everyone got back in gear to continue digging the well.

On March 15, 2011, the well reached a depth of 15 meters and for the first time had ground-water seeping in at its base. It was at that time that a technician was called to come out and help us construct the concrete “cutting ring” that would serve as the foundation for all of the Dutch bricks to then be stacked upon.

The importance of constructing the well wall with Dutch bricks was obvious at this time as the well walls at the base had already gradually began collapsing. It is for this very reason that there is not a single functional well in the village of Socourani; the soil composition is such that it cannot withstand the forces that make the well cave in.

Once the cutting-ring foundation was complete and the initial layers of brick set in place to brace the walls, the villagers were confident to continue digging without the fear of the well collapsing on them. With much effort on part of the villagers, they continued digging the well an additional 4 meters to make the well a total depth of 19 meters (just over 62 ft.) These last four meters were hard work in that one person needed to continuously bail out water as the other dug the well deeper.

We continued digging like this until reaching a level at which the water entering the well was too fast for us to be able to dig it any deeper. With the amount of water that has risen in the well right now in the peak of hot-season here in Mali, the villagers have absolutely no fear of this well going dry.

Digging this well was an incredible amount of work on the part of the villagers, but it was amazing to see them all work together and have their work result in such a success. With the combination of their sweat and the generous donations received, these villagers of Socourani have earned a dependable water source for themselves and for the generations that come after them.

On behalf of the nearly 500 villagers of Socourani, we thank you and the generous donors of Water Charity for making it possible to get access to a dependable water source. We are truly grateful.

We in turn extend our thanks to Owen for completing this great project, and to the Dr. & Mrs. Shima for providing the funding.