This project has been completed under the direction of Peace Corps Volunteer Nic Wilder.

The project was to build a rainwater catchment system to provide for the water needs of the school.

This project was to build a 5,000 L rainwater catchment system for Slahhamo Secondary School.

The funds were obtained on September 4th, 2013. All materials were bought by September 14, 2013 and transported to the school the same day, but the 5,000 L sim tank was more difficult to get to the school than anticipated. 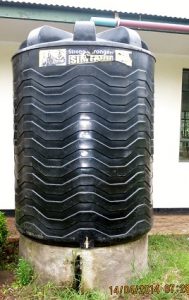 The dry season was longer than expected and the community proposed using the sim tank to transport water to the school. Although a good idea, the sim tank was too heavy and unstable to be transported on the village roads.

During these slight logistical problems, it was decided that the roofline next to the laboratories was a more suitable spot for placing the tank. The newly chosen spot was preferable because it was more easily guarded, and had a longer roofline to better collect water.

By November 8th, 2013, the foundation was finished, a tap was fitted, and the sim tank was erected.

Unfortunately, the new spot was host to a set of 3 separate or one gigantic beehive that spanned the entire length of the roofline. Attempts at removing the bees were unsuccessful.

Until late March, there was little activity surrounding the project. After complaints from the community, the headmaster moved into action, and on April 8th 2014, the honey was harvested, the bees were vanquished, and the gutters and piping were installed, finishing the project.

Subsequently, there were very heavy rains that caused the normal village water system to be blocked with mud and rocks. The rainwater catchment system has already proven invaluable in that it prevented the closure of school due to disrupted water access.

We are grateful to Nic for completing the project. We again wish to thank Douglas Gillen and Nic’s other friends and family for providing the funding for the project.