This project has been completed under the direction of Peace Corps Volunteer Amanda Cornish. To read about the start of the project, CLICK HERE.

The project was designed to construct a simple deep-dug well and repair an existing well.

1) Scope of the project
The goal of this project was to provide easy access to clean water for the 45 garden members and 50 surrounding households (more than 600 people) in a small rural village in Benin. The well water is used to water the crops as well as provide potable water. As access to clean water increases, so does vegetable production which improves the diet of the 7,595 residents. The eventual expansion of the garden will also help fight malnutrition in Sinende, the commune head, with more than 13,000 residents.

2) Specific work done
The initial objective of this project was to construct a simple deep dug well and repair a pre-existing well for a community garden in a small village in the commune of Sinende. The unlined and unwalled well had become a dangerous sinkhole located in the center of the garden. The hope was to repair this well.

After the contractor began work, he realized the earth had eroded too much to make a properly sized well. It was necessary to simply fill the old well and build a second well in a different area.

3) How the work progressed through each stage (Challenges, struggles, interaction w/ community, easy parts)
The garden group had very little structure in the beginning. It was difficult to have a real planning process. It became necessary to elect new group officials. Formal rules and regulations were established from plant bed size to fines for missing a reunion. After the restructuring of the garden group it was possible to create a plan of action.

Together the community cleared the necessary area of weeds and brush. The officials went on the necessary supply runs and oversaw needed contracts. The contractor was diligent and efficient in his work, filling of the old well and construction of the three new wells within a shorter timeline. My counterpart commendably managed the fence repair and expansion. The community really worked together on this project. 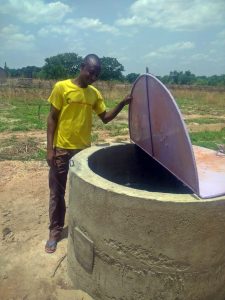 4) End result
The three wells are solid and durable and require little maintenance. A respected contractor used by NGOs in the area built the wells in a timely fashion and up to area standards. In addition, after the wells’ construction, a participatory hygiene training and training a group of caretakers who can repair the new wells and pulley systems will occur.

The gardening group has five officers who will ensure those using the well respect the rules and use the well correctly. These same officers are also responsible for holding the keys in the dry season if the garden group members vote that the well be closed to the public.

The well builder estimates these wells, if properly maintained, could last for twenty years. The goal of this project was achieved. The garden and surrounding households now have easy access to clean water.

5) Any reactions or quotes from the community
– Now we can garden year round. – Amira, garden group member
-I didn’t think this was possible. Now I think everything is possible. – Hakilou Assouma PCV counterpart
-Thank you. The group is determined like I’ve never seen before. – Mariam Iem, garden group treasurer
-The women are happy. I am happy. We will make more people happy. – Janette LaFia, garden group

Amanda adds:
This project has made a huge impact on my community. Benin is a very patriarchal society. Women are often told their work is not as important as men’s. This garden group is valued by everyone in the community and gives women a voice they otherwise wouldn’t have. It was impossible for the garden group to continue to work with their limited supply of water.

There has become a huge water crisis in our world where the 1% of drinkable water on earth is becoming contaminated. It is hard for many in the Western world to see the value of water since it is a turn of a knob away but here water is much harder to find.

I cannot thank you enough for donating the necessary finances to change this community’s way of life.

We extend our thanks to Amanda for completing this important project. We are grateful to the G3 Foundation for providing the funding. 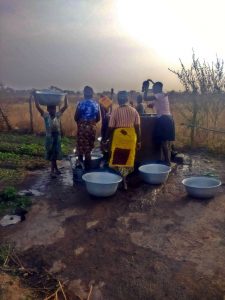 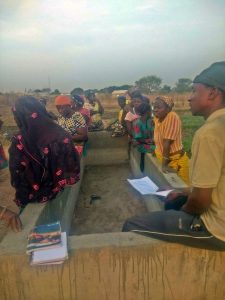