This project was designed to build 39 latrines in the community. The project has been completed under the direction of Peace Corps Volunteer Martha Wagley. 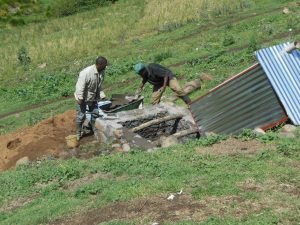 The goal of the Sefateng Latrine Project was 1) to build 39 latrines in the community, improving quality of life and 2) to use constructed latrines healthily eliminating transmission of fecal-oral diseases spread through open defecation, thereby improving general hygiene and environmental sanitation.

During the course of the project 40 latrines were built and in the last few months, villagers have been using the healthy latrine use methods they learned at a Red Cross training to eliminate public defecation which has in turn been improving sanitation and hygiene in the area.

Our chieftainship is home to 67 families. Although the grant initially accounted for 39 latrines we had one family join after the money came in. We allowed families to do this if they contributed an increased amount of money (M200 as opposed to M100) for joining the project late – only one family joined after the grant money was raised. Hence, we built 40 latrines.

Among families involved in the project public defecation has been completely eliminated. Villagers have stopped using the area near the river for defecation and have even changed the practices among small children in their households through setting up a small bucket next to their latrines for the children to use. Every morning since my host family’s latrine was built I have met my young host brother defecating in the small bucket next to my latrine. His mother empties the bucket into her latrine regularly. Along with these changed practices families have started to buy toilet paper for regular use from the local shop which has recently started carrying it after never previously stocking it. Not all families are doing this, preferring to use plants but it is an improvement on the practice of using unsanitary items in the latrine. 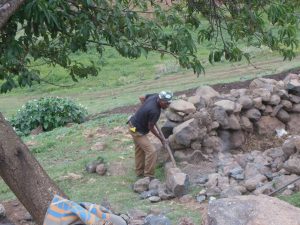 In February we went to the small town 2 hours driving distance from our village to buy the materials – latrine frames, wire, iron, and cement – necessary for the project. When these materials arrived in March on the road about half a mile from our village community members worked together to carry the materials to the village so we could start building. From January to May community members worked tirelessly to complete the latrines and we finally finished building all 40 latrines at the beginning of May. Community families would transport sand and stones on their donkeys 3-4 miles to their homes and after one family completed collecting their sand and stones our builder would come and build the latrine, going from house to house on the basis of collected materials. The walk to church all of April consisted of us stopping to inspect every river for suitable sand – apparently it must have the correct pebble to sand consistency.

The project was characterized by community collaboration at every turn. When we went to town to buy materials three community members acted as police to make sure none of the money was stolen from the bank to the shop (they initially wanted to hire real policemen but I assured them that they could do the job), when the cement and iron latrine frames arrived community members hauled the cement and frames down from the road on their heads and donkeys, a 4 day process, when a family couldn’t dig their hole on time due to the lack of a male in the household neighbors contributed their time and shovels, and when the builders were hungry and needed a place to sleep families donated their homes. The collaboration during the course of the project demonstrated the community commitment to and enthusiasm for the completion of the project.

The village loves their new latrines saying “motseng o motle” meaning “our village is beautiful,” uses them regularly and is very excited that they actually finished the project and did not “eat the money” as many community projects in our area are characterized by mismanagement of funds and failure.

The fact that this project succeeded has given community members confidence to do more projects in the future and they are very thankful for the support.

We are grateful to Martha for completing this project.