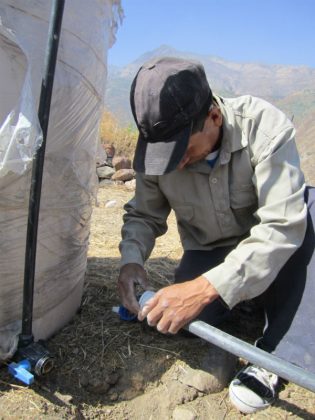 This project has been completed under the direction of Peace Corps Volunteer Maggie Messerschmidt. To read about the beginning of the project, CLICK HERE.

The project was to build 2 rainwater harvesting systems.

Project Summary
This project consisted in the construction and implementation of water harvesting techniques in an agricultural town in the arid foothills of the Andes. Due to climate change, overgrazing, and deforestation, San Bartolomé´s already minimal rainfall does not suffice to meet agricultural needs.

With interest in cultivating a better understanding of integrated water management, and especially in the benefits of slowing and controlling water flow over land, this initiative was carried out in conjunction with a SPA project called Sembrando Agua, Cultivando Comunidad (Planting Water, Cultivating Community) which involved the creation of a documentary, a local manual on water resource management, several eco-cultural workshops focused on traditional water rituals of the Andes, as well as the reforestation of over 300 native trees.

Appropriate Project funds were used to build a small water harvesting system for the school garden and a drip irrigation system for the reforestation in an area designated for the newly constructed Visitor´s Center for the local forest reserve, Bosque de Zárate, a nationally declared protected area.

Project Progress and Results
Barrels, gutters, conduction chains, screens, and basic irrigation connections were purchased and transported to the community. Plans were made with the school principal and the PAFA (Parent´s Association) to implement the rain harvesting barrel, as well as to initiate plans to renovate the school garden. The project would be a first step in the transformation of the abandoned garden of prickly pear cactus into an integrated garden with fruit trees, food crops, and native trees and grasses. 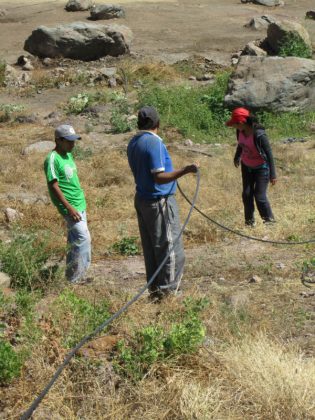 One mother helped to test the system during rainy season and observed the flow of water from the roof to the garden. A community father helped to prepare the barrel by opening it and locating the valve and irrigation connections.

Then, the rain barrel was painted – collage style – by students. The barrel was located in the garden with students, raised up on a pilca of rocks, and the gutters, conduction chain, and tubes were connected.

Several community members contributed by lending tools and materials (ladders, drills, wire cutters, etc.) for the implementation of the project. Teachers, the principal, and students have been trained in rain barrel maintenance and significance and are making plans to use the barrel in the garden next rainy season.

Another part of the project involved coordinating with the Comunidad Campesina, the Municipality, AgroRural, and ecological group Comando Ecológico (Lima) to plant molle and tara trees in Chunaca, the area surrounding the Visitor´s Center, which was in its final stages of construction. Though the original idea had been to install a rain barrel, the delay of the construction of the Center, especially the roof (a key element to our water harvesting design), led us to redesign our plan.

The municipality and AgroRural helped us to access trees, so we coordinated a reforestation with over 30 volunteers in January and over 300 trees. In order to sustain the trees, water would have to be rationed to the area, stored, and distributed.

We purchased a tank and equipment for drip irrigation, including tubes, connections, filters, adaptors, and caps. First, the tubes and tank were transported to Chunaca, a feat in and of itself. The tubes were actually carried on the shoulders of some volunteers during the reforestation project.

After the reforestation, we coordinated with the Municipality and Comunidad Campesina to locate the tank, design a croquis and make a plan for maintenance of the trees. One man was appointed to take care of the trees as the rainy season came to an end, and we made plans with another man in town who had received training on drip irrigation to train the rest of us to install the new system for the plants. There were many trips to Lima for missing parts, and several trips to Chunaca to build the system little by little on designated days.

The system now functions with very little water, and serves as an example to community members as well as visitors to the reserve of appropriate irrigation and water management techniques. As the trees grow older and need less assistance, it is agreed that the community will locate the tank under the roof of the Visitor´s Center, harvesting rains that fall upon the large surface.

We are grateful to Maggie for completing the project, and again wish to thank the Elmo Foundation for providing the funding. 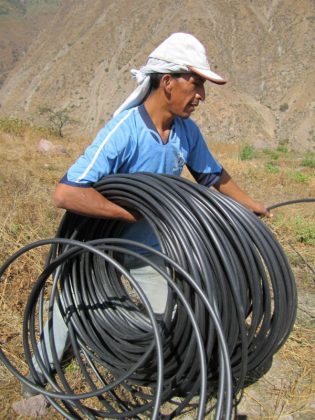 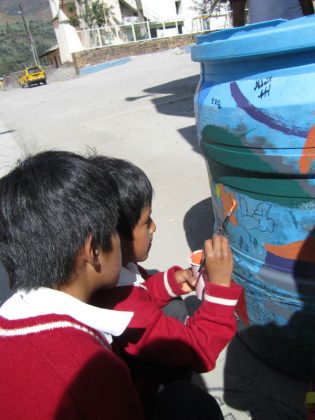 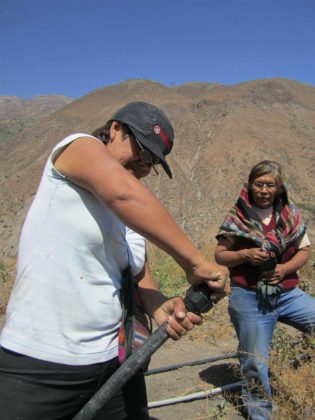 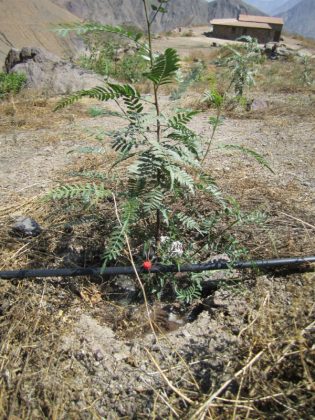