This project has been completed under the direction of Returned Peace Corps Volunteer Dave Rowson. To read about the start of the project, CLICK HERE. 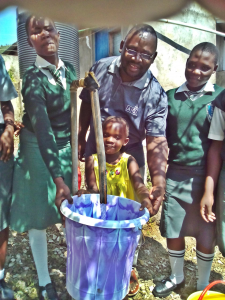 The Problem:
The water source for the St. Joseph’s Girls Secondary School, the Parish priests and support staff had failed, and had forced the eighty-five girls to walk the steep mountain road down to Lake Victoria for their washing and drinking water. The school services and priests and nuns were also forced to purchase water from local vendors.

The water from Lake Victoria is not potable by any standards and presents a health hazard for the girls. Transporting it also required a time and labor investment that took from their studies.

Diagnosis of the Problem:
Borehole pump and motor vendors were called from Nairobi to diagnose the cause of the pumping failure. Prior cursory inspection by local vendors had indicated that the pump was operational but was not producing, perhaps due to a disconnected pipe connection. 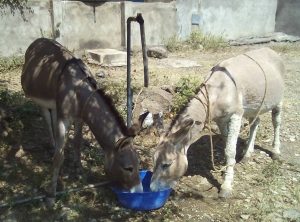 The vendor removed 16 metal pipes of 20-foot length, the motor and pump. Analysis of the pump and motor revealed that the failure was in the motor. The vendor insisted that the motor must be replaced.

The priest in charge wanted a second opinion and traveled to Kisumu to meet with a pump and motor vendor for his analysis. The result was that the motor had shorted out due to a leak. It was repaired and was reinstalled in the borehole, by local workers, at considerable savings.

We had received a quote for the removal of the pipes, replacement with PVC pipe and the reinstallation of the pump and motor. Needless to say the cost to replace the pump and or motor would more than double the cost of the project and put us out of the ability to pay. 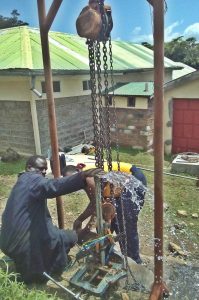 Restoration of Water Service:
After the refurbishing of the motor, local electrician Ambrose reassembled, tested and reinstalled the motor/pump system. Another crew reinstalled the 16 pipes back into the borehole.

Success was realized when the pump was tested. Water gushed out of the pipe to the cheers of the assembled stakeholders.

The pump is run for two hours daily and sends water to a concrete water tank higher on the hill. From there it is distributed to all the structures, and the St. Joseph’s Girls school. The girls now have all the water, at high pressure, they need. The kitchen also now has readily accessible clean water.

We even had one unanticipated benefit. The donkeys on the hill now also have a source of fresh water!

Budget:
The cost for the project was estimated on the high side due to the uncertainty of the condition of the pump and motor. It was prudent as we had the expense of the motor repair. If we had followed the advice of the Nairobi vendor the cost would have exceeded $3,000. As it was, there was still a shortfall, but it was made up by Father Robert, the priest in charge.

Conclusion
This has been a very rewarding project. It has helped so many with basic needs, and spirits are high. 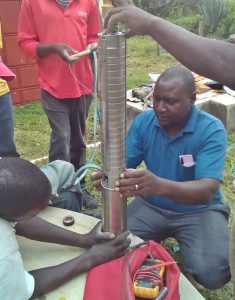 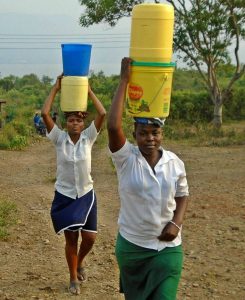