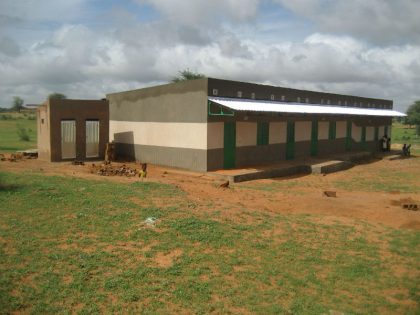 This project has been completed under the direction of Peace Corps Volunteer Jonathan Larson. To read about the beginning of the project, CLICK HERE.

The project was to build two latrines at the school.

Jonathan reports on the construction:

The latrines were constructed under the direction of Aliou Sylla, the director of Primary School #2. He kept meticulous accounts of all expenses, and ensured that I received receipts for every purchase. Members of the community and parents of students at the school participated in the construction process, even taking pay cuts to facilitate completion of a resource they knew would benefit everyone.

First, one community member mixed sand and cement to make 667 bricks. This was the longest step of the process because he had to water the bricks for several days after he made them.

Next, the same man dug a hole for the septic tank. After that, the mason and his two helpers used some of the bricks to build a 6 x 8 feet septic tank in the hole, using cement as mortar.

The cover of the septic tank is cement, strengthened by rebar. The masons set it on wooden planks to support it while it dried.

One final community member bent the rebar into posts, which the mason and his two helpers covered with cement and fixed as the corners of the stalls of the latrine. The rest of the bricks were used to make the walls.

This main structure measures 5 x 10 feet at its base. The front its walls reach to a height of ten feet, and slope down toward the back, where the wall is eight feet high.

On the last day, the mason’s helpers covered the latrine with cement to make smooth walls while he attached the doors (aluminum with wood frames). They also installed the “chaises anglaises” (the porcelain parts of the toilets) and smoothed the floor inside the stalls with more cement.

The end result offers privacy, convenience, and sanitation, and is even pleasing to the eye. Thank you again for making this possible.

The President of the Association of the Parents of Students, Abdoulaye Tom, wrote:

The population of Donaye thanks you heartily for building latrines within the school. We are very appreciative of it and we encourage you to continue these actions in favor of the people.

We are very open to cement a relationship with Appropriate Projects.

We also thank Jonathan Larson, representative of the Peace Corps, for putting us in touch with you. 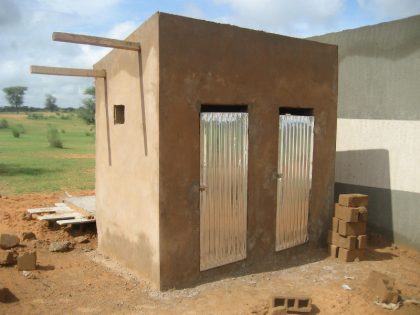 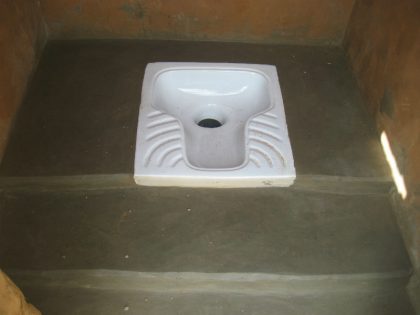