This project has been completed under the direction of Peace Corps Volunteer Bruce Kelsey. To read about the beginning of the project, CLICK HERE. 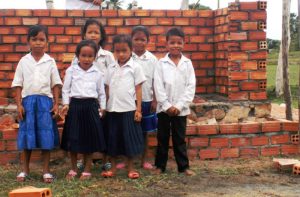 The project was to expand the sanitation capacity at the school by building a stand-alone latrine with two toilets.

My counterpart, Mr. Khem Samorn, worked closely with the school administration to purchase all the materials and have them delivered to the school. This was completed on the weekend of June 22 & 23.

The next day, our stonemason, Mr. Nen Soda, who has worked with us on the majority of previous projects, arrived with a double crew and work went extremely quickly for three days. The drain tanks were installed, foundation laid, and walls nearly completed.

It looked like they were going to be able to complete the project before I left, but…then the rains hit hard and all work had to stop. Before it could begin again, my Completion of Service time rolled around. Fortunately, Mr. Bret Guderian, the Peace Corps Volunteer in a village about 12 kilometers away, was willing, and more than capable, to take my place and complete the project.

Mr. Guderian, Mr. Khem, and Mr. Nen & his crew completed work on the project in the first week of July and the new latrine was painted by July 9th, with the donor list being added in August. 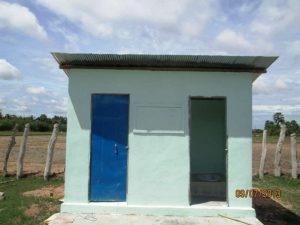 I would like to thank Mr. Nen and his crew for their great work and for completing so many projects for us. I would also like to recognize Mr. Khem for his great help on the Prey K’Cheeay & Angmotreysatram projects, Mr. Tim Savin for his great help on the Ang Chak & Samarky projects, and Mr. Meng Keang for planning & supervising the Ang Chak projects. And I would like to thank Mr. Guderian for completing this project for me. But, mostly I would like to thank Averill Strasser and everyone at Water Charity for making all these projects possible AND thank all the donors who contributed to helping Chum Kiri district!

Thanks again! These projects were the most satisfying part of my Peace Corps time.

We are grateful to Bruce for the completion of his tenth and final project in partnership with Water Charity, and wish him the best. We also again extend our thanks to Bruce and his friends and family for providing the funding for this project.