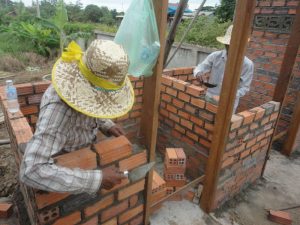 This project has been completed under the direction of Peace Corps Volunteer Matthew Beaumont. To read about the beginning of the project, CLICK HERE.

The project was to build a new bathroom with two toilets at the school.

Completion of the project was delayed by several minor setbacks. Our initial date to begin construction in the beginning of August was delayed by nationally-mandated examinations that required the school staff’s full attention, forcing us to break ground on the project two weeks behind schedule.

Work on the bathroom moved at a steady pace for nearly three weeks before heavy rainfall delayed our efforts for several more days.

Construction was put on hold for a third time in early October in order for our contractor and his team to observe the Buddhist holiday of P’chum Ben, an issue we had hoped to avoid by completing the bathroom before the week-long holiday began. Additional rainfall during and after the holiday led to major flooding for a second time, extending our work hiatus from 5 days to 20.

The Phnom Thom High School staff supervised the construction of the latrines. Many of our volunteers from the community worked extra hours to account for the unexpected setbacks. Construction was finally completed on October 20th, 2013.

All unskilled labor for the project (including digging the pits for the latrines and laying cement and brick) was conducted by members of the school staff and local volunteers from the community. All further construction was completed by a local contractor using locally purchased materials. His team was paid using Water Charity funds.

The teachers are excited about the new bathroom and the school director has expressed a desire to work with Appropriate Projects again in the future. The local cooks and sellers at the school, whose stands are located next to the new bathrooms, are very appreciative of the added convenience that the toilets will bring to their daily routine. Several students have stopped by the campus to see the bathroom, with many commenting that the new building is sa’at nas (Khmer for “very beautiful”).

Approximately 1,500 students and staff members are expected to benefit from this project directly, as the number of latrines on campus has now been doubled. The newly constructed bathroom is expected to increase sanitary practices while reducing student truancy during lessons.

I would like to personally thank the members of Phnom Thom commune who dedicated their time and energy to see this project through. Additional gratitude is extended to all of the donors whose contributions made this project possible, and Appropriate Projects for coordinating the entire effort.

We are grateful to Matthew for completing this project, and again send our thanks to the donors who provided the funding. 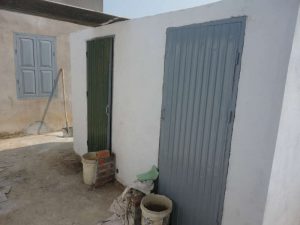 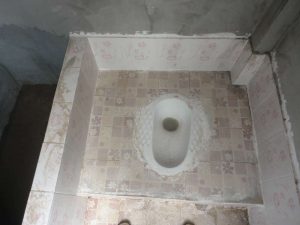