This project has been completed under the direction of Peace Corps Volunteer Shari Orr.

The project was to construct pit latrines at the center. Shari reports:

The Nyetane NCP committee received the funds for the pit latrine project on 18 February, 2014. The project leaders immediately went shopping to purchase all necessary supplies, saving receipts for each purchase and purchasing only supplies needed to build the toilets.

Construction of the toilets began on 24 February. Although the project was delayed due to two solid weeks of rain, which prevented laying any cement, the group was able to finish the project the first week of April. Allowing two weeks unavoidable delay due to inclement weather, the group completed the project within the allotted four weeks (18 February to 1 April).

As planned, Maggie Gwebu and Victoria Ndzinisa served as project managers. These two women did a phenomenal job of communicating between the Peace Corps Volunteer, the NCP adult leaders, and Mfanasibili Tsabedze, who completed all construction. Mr. Ndzabanzaba served to transport the materials (David Tfwala, the original transport manager, was unavailable for the proposed shopping date) and even made a second volunteer trip to town to get the last of the supplies. 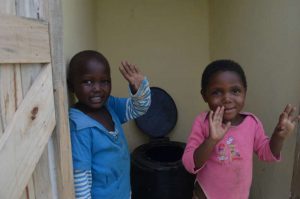 As planned, the community donated the land for the toilets, even allowing the original fencing to be moved to include an entryway into the toilet from inside the NCP yard. Community members also donated their time to assist in moving cement blocks, sealing the bricks, and painting. Mfanasibili Tsabedze was compensated 100 emalangeni (about $9 USD) for his time, which is far less than his usual rate.

The Appropriate Projects funds were used to purchase the equipment needed for the pit latrines, transport to go to and from Siteki (a nearby town) to estimate costs, bank fees for the initial money transfer, and a minimal amount of air time to facilitate phone calls between project planners.

The completed pit latrine is one building with two stalls, each containing one toilet. The pit was dug prior to the project start, using community tools, and the community had already laid a foundation of bricks and wood for a floor. The floor platform is made of cement, including two holes for the toilets, which the toilet seats fit over. The pit latrine building is approximately 2.5 meters long, 1.25 meters long, and 2.5 meters high.

The pit latrine walls are made of cement bricks, produced by community members. The walls are completely solid except for a small, high window in the back wall of the pit latrine, to allow light and ventilation. The outer walls include metal hooks, which are securely fastened to the wire fencing that now incorporates the pit latrine into the NCP yard. 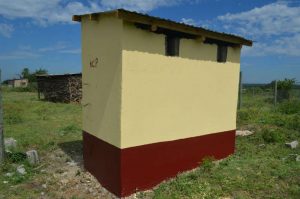 The roof is made of sheet metal securely nailed over wooden rafters. The doors are fitted snugly into the doorframes and swing open easily. Each door also has a lock and key, which will stay with the NCP adult leaders to ensure the toilets are kept in good condition when the NCP is not occupied.

Moving forward, the Nyetane community will be responsible for maintenance and care of the completed toilet. Mrs. Ndzinisa and Mrs. Gwebu, as leaders of the Neighborhood Care Point, have headed the project committee and will continue to provide leadership as maintenance is needed. They will be responsible for maintaining the toilet on a daily basis and for mobilizing community members to volunteer for occasional maintenance.

The first school term of 2014 is now ending, which means that children will not be regularly coming to the NCP for several weeks. The community plans to do a handwashing and sanitation awareness day with the NCP children and adult leaders once the second school term has begun.

The completed project has left some cement, bricks, and sheet metal unused and unreturnable. The NCP adult leaders have proposed to use these extra materials, as well as timber, doors, toilet seats, and additional cement donated from the community, to build a second toilet within one year. This toilet would be situated outside the NCP yard and would be left unlocked, allowing general members of the community to use it freely. This idea was proposed by the NCP adult leaders and approved by the PCV after the initial project was completed, particularly because of the sanitation benefits it will provide to the neighboring homesteads. Until this second toilet is completed, the extra materials will be locked inside the NCP building and guarded by the NCP adult leaders.

We are grateful to Shari for completing this excellent project.