This project has been completed under the direction of Peace Corps Volunteer Robert Snow.

The project was to build a water storage system and install water heaters at the school.

I am pleased to announce that the project was finished at my school!

The first step of the project involved the director of the school, the school physics teacher/maintenance man and I shopping in the city for our materials. We found the pump and water reservoir relatively quickly; however, deciding on which boilers to buy took some time to talk through. After much deliberation, everyone agreed it would be better, both economically and strategically, if one large boiler was bought for both washing hands and the shower rooms. Having one boiler made it easier to hook up the piping to the reservoir.

My neighbor was kind enough to bring his power tools to the school and drill all necessary holes through the walls that were required for the project. The reservoir and pump were installed in a room next to the kitchen, hand washing station, and shower rooms. The boiler was installed to this reservoir and piping then split in two directions, one toward the kitchen, the other to the sinks and showers. The water is easily accessible to the nurse as well, as her office is just one door away.

All in all, everyone at school was excited and relieved. The project could not have been completed at a more opportune time, for temperatures dropped into the twenties and during the installation, school had to be cut short due to lack of water.

I know my director and everyone in the community appreciates the project and I want to thank you for everything.

We extend our thanks to Robert for completing this project prior to the evacuation of the Peace Corps Volunteers from Ukraine. 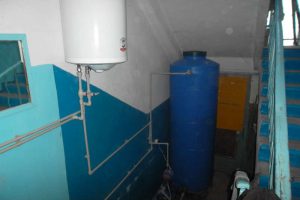 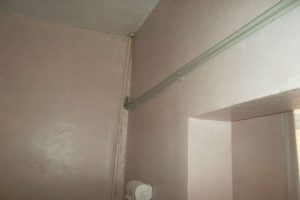