This project has been completed under the direction of Peace Corps Volunteer Nick Allen Taylor.

The project was to create a rainwater collection and catchment system for the school by improving the collection tank and installing gutters and piping.

The project has been completed. Once funds started moving, it only took just over a week for everything!

First, the students took turns cleaning out the existing tank/hole, shoveling and bucketing out water, mud, and other trash that had collected inside.

The workers then broke out pieces of the cement to repair cracks in the tank and lay a new layer of cement over the entire inside.   When that was

finished, brick-makers used two bags of cement to make cement bricks, which the cement workers used to build a three-brick high wall around the top

edge of the tank.

The wooden beams were secured into the top-most bricks and iron sheeting was nailed down, with a latched opening to allow access.

An existing piece of plastic gutter was moved from the office building nearby and attached to the classroom nearest the renovated tank.

The two remaining iron sheets were used to construct the gutter assembly between the building and the tank.

We are grateful to Nick for completing this project and extend our thanks to the donors to date. 150 students now have an ample supply of clean water. 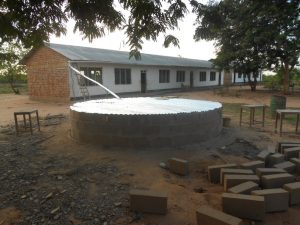 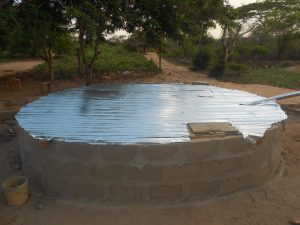