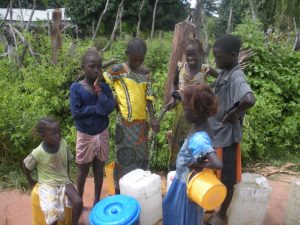 This project has been completed under the direction of Peace Corps Volunteer Suzanne Brewer. To read about the beginning of the project, CLICK HERE.

The project was to make water available to the people living in the compounds by running piping from the school water supply to a conveniently accessible location.

I received an email in April 2011 from Balla Drammeh, the community member who first approached me about the project and coordinated it. He told me that the tap had been installed and the “community is using it well with happiness and appreciation”. I have been in sporadic contact with the people of Ngundu Kebbeh since then but thanks to my husband and the placement of a Peace Corps volunteer in his village, I have received more information and the photos I needed to complete a report.

The PC volunteer wrote me in June 2013 and confirmed that the project was completed a month after I left the Gambia (February 2011). It includes significant length of pipe from a bore hole to a tap located near the ten compounds that were drawing water from a well. The tap was installed by a plumber, Malobey Jeng, and the community helped by digging the trench for the pipes and assisting with the plumbing. 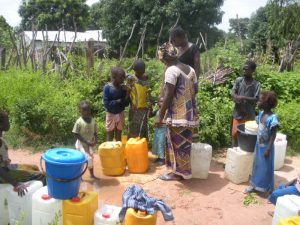 There were problems soon after with the pumps at the borehole (which were not part of the project funded by Water Charity). These pumps are, or at least were, solar powered and failed to continue delivering water to the taps. They are now run by a generator and the ten compounds pay for the fuel to run the tap 2 or 3 times per week.

The Peace Corps volunteer goes on to say, “This is not an ideal situation, because of the fuel demand. The taps do improve the lives of the community members and lessen their work when they are running. People tend to fetch several days’ worth of their water needs when the taps are turned on.”

Because of her observations, it may not be apparent how the tap lessens demand on the community when they have to come up with funds for fuel and fetch several days’ worth of water at once. But having been in The Gambia and seeing how the people are challenged every day in using their time and resources, I can fully see how the addition of running water that does not have to pulled bucket by bucket up a well would be a benefit. 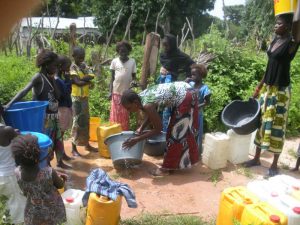 There is no doubt in my mind that the project was a worthwhile undertaking to relieve some of the workload for the women and children of Ngundu Kebbeh. Some of those women and children are in the photos: Ebrima Jawo, Awa Jallo, Kumba Jow, Kumba Ceesay, Binta Jeng, and Adjie Fatou Njie.

I would like to thank the donors of this project for their investment and their patience, knowing that this report was expected months ago.

This was the third of five projects undertaken by Suzanne in partnership with Water Charity during her great Peace Corps career. The others were completed on schedule before Suzanne’s departure, but after Suzanne left The Gambia, there was difficulty in ascertaining the success of this project. The completion report demonstrates the tenacity of PCVs in completing projects that serve their communities and their continuing interest in those communities once they are gone. It also shows how Water Charity pursues these projects to their ultimate conclusion!

We are extremely grateful to Suzanne for her performance and perseverance. We again thank The Soneva SLOW LIFE Trust for the funding they provided for this project and their continued support of Water Charity projects.