This Let Girls Learn project has been completed under the direction of Peace Corps Volunteer Laurel Duncan. To read about the beginning of the project, CLICK HERE. 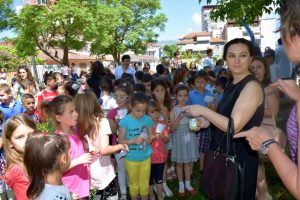 And, over the course of 7 full working days, we accomplished just that. There were some roadblocks along the way, and our timeline did not happen the way that we initially planned it. While we hoped to complete the work in January or February, the work was begun the last weekend of April. We also learned, as we were about to start, that the sewer problem that we had been told was the reason for the smell throughout the first floor, was not the whole problem. In fact, the problem stemmed mainly from the Turkish toilets in the boy’s bathroom not being plumbed correctly. Waste did not go anywhere. It just sat in the u-shaped pipe just below the porcelain toilet.

As luck would have it, the flushing mechanism that we had planned to purchase and which we believed would be less likely to break, was no longer available by the time the grant was approved and we received the funds to begin purchasing supplies. So, we decided to fix the pipe problem by removing the boy’s six Turkish toilets, and installing new pipes and Turkish toilets after laying intermediary lines to the main sewer line. In addition, we cleaned out the main sewer line, which was blocked from the building to the main road. All of these changes cost less than the originally priced flushing mechanisms and allowed us to complete the work under budget, but far over the man hours that we initially anticipated. 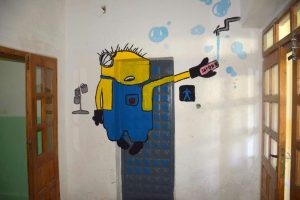 We also placed two light fixtures (versus one) per bathroom as we decided that more light was better for the stalls and children’s comfort and safety. The lights had decreased in price, so the overall price for 4 units versus 2 was not substantial. We had saved in other areas (due to decreased prices and unexpected donations), so we felt it was okay. Both bathrooms were painted, walls and ceilings. And, the students contributed by painting different murals on the outside of the boy’s and girl’s bathrooms. Initially getting them interested was a challenge, but once the painting began, a lot of students (and, a few teachers) wanted to help.

We replaced all the faucets and fixed all leaky pipe issues within our scope (there are still a few more major issues that we have reported to the school director. She needs to get the Bashkia and water company to take care of these two problems). All the drainpipes were replaced, and all the bathroom stall doors were replaced. We used steel doors instead of the typically used aluminum. Steel is not only stronger, therefore will last longer, but the cost per door was significantly cheaper. As it turned out, the owner of the steel company is the father of two children who attend the school, so he donated one of the 14 doors as a community contribution in addition to two other small steel-related items we needed.

We had some challenges with the Bashkia workers, who did not really want to do the hard labor required for the job. This, in turn, required myself and our community contractor to do more work than anticipated, but the job was done and we feel that the job was done well.

The Department of Public Health’s contribution were hygiene and puberty lessons with every class from kindergarten to 9th grade. For the older students the nurses focused on puberty issues, and for the younger, hand washing and personal hygiene.

Our last activity was a panair (health fair), and because the school in total has 800 students we conducted mini health fairs throughout the day seeing two classes at a time. The health fair consisted of watching the UNICEF Global Hand Washing video, then breaking into small groups (10-15 students) for a hand-washing lesson using glitter to illustrate germs and best-practices for getting germ-free hands (towel only, water only, or soap). The students really enjoyed the activity and by the end, the students proudly showed their “PA MIKROBE!” hands (without germs!). The last thing was teaching them the Peace Corp Niger Hand Washing song, which we had translated into Shqip. Everyone came together to sing the song, and then make a promise to keep the bathrooms clean, to protect them and take care with them. The health fair was really a highlight of the whole project. The school has taken part since the beginning when my counterpart and I visited every class asking them what they thought of the bathrooms and what could be done. They all invested in the project by donating soaps, toilet paper, cleaning products and small amounts of money. They had seen myself and the contractor coming time and again to meet with the director and various other workers, as well as working on the bathrooms, to the finish when they painted the murals. It was a beautiful end to a very long process.

Comments from the Community:

We are grateful to Laurel for completing this excellent project. 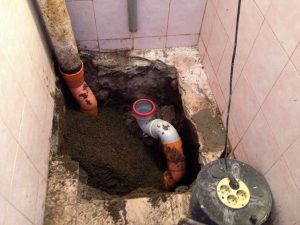