This project has been completed under the direction of Peace Corps Volunteer Katelyn Dzialowy.
To read about the beginning of the project, CLICK HERE. 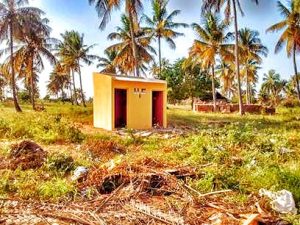 We would like to thank Katelyn once again for executing such a fine project.

The following is a conclusion report from Katelyn:

Throughout this project, our main concern was keeping the project within the community.  I enlisted the village leader as my counterpart and advisor for this project.  With his help, I was able to work with shop owners for them to prepare the amount of materials we would need.  He was also about to arrange workers, water carriers, carpenters, and even transportation of our cement blocks that were created at a different location.

Originally, the plan was to build two bathrooms at the market and another two at the primary school, but unexpected conversation with a group of market ladies changed our plans.  We had planned to have one bathroom for males and one for females in the same structure.  After this conversation we switched plans and built 4 bathrooms at the market in two different structures:  one structure for females and one for males.

We were able to build the bathrooms in two weeks.  After construction was complete, a student volunteered to paint the structures and paint two separate murals with HIV and Malaria themes.  When he heard about the bathroom construction project he approached me to be involved.  He volunteered his time painting stating “This is something our community has needed for a long time.”   When I asked him why he agreed to volunteer without incentive he said “I can’t receive money for something that is going to help keep the market clean and stop the spread of disease.”

The final outcome of this project received a great surprise when the municipality of Inhambane Province agreed to create a plumbing system so toilets could be installed in these structures.  A person has been appointed to clean and manage the bathrooms keeping the cleanliness sustainable. This project was successful and the bathrooms turned out beautiful. 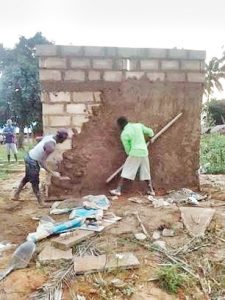 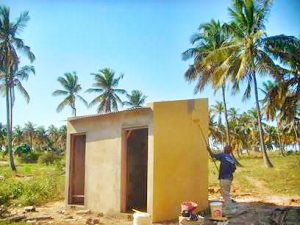 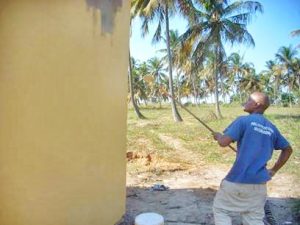