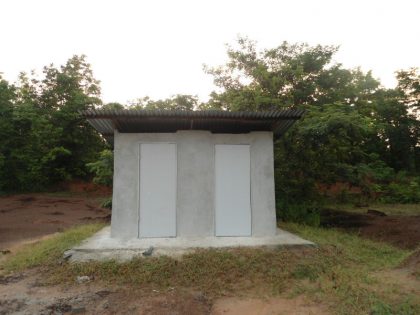 This project has been completed under the direction of Peace Corps Volunteer Kale Roberts. To read about the beginning of the project, CLICK HERE.

The project was to build a two-stall bathroom facility with water faucets at the entrance to the Lahokrasang Community Forest.

Background
Tambon Kaokok, a sub-district in the Northeastern province of Buriram in Thailand, stands out as a model of sustainability in the region. Most of the Northeastern region’s native forests have long ago been logged. Only in a few scattered national parks do old growth forests remain; Kaokok is no different. However, its citizens have taken a different approach to the managing the new growth forest as it matures and heals, managing it collectively for the benefit of all villagers.

As a leader in the region, Kaokok Community Forestry Group hosts hundreds of students and civic groups each year who come to learn about community based forestry management. This is in addition to the hundreds of local visitors who use the forest as a food source. However, without proper bathroom facilities, the community forest had reached it capacity to host visitors safely for longer than a couple hours. Water Charity was able to help, funding the Kaokok Community Forest Bathroom Project – a modest and durable, two-stall structure made from concrete bricks and metal roofing, complete with an environmentally-safe storage system for waste and rainwater catchment during drought seasons to conserve forest water resources.

Scope of Work
Members of the Kaokok Community Forestry Group spent 2 weeks constructing the 2-stall bathroom facility in early 2012. An open-air meeting hall “sala” was constructed in 2011 to host meetings and camps. The bathroom facilities were constructed adjacent to this meeting sala on the western side. Conservation Group members did all the construction themselves; all materials were purchased from local sources where possible.

Several building days turned out to be quite the community event, with big baskets of sticky rice, smoked fish, and curries brought at lunchtime by women in the nearby Lahokgrasang village. 5-12 men and boys (members of the Youth Group) were always present to lend a hand or stand nearby and lend some advice from a distance. Building days provided opportunities for men and women of the community to offer their labor to make their community forest group more effective in the future. Besides hard clay soil, difficult to dig in, the project met no insurmountable hurdles, members claim. 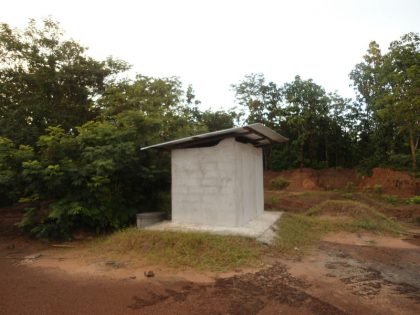 The bathroom structure consists of a small rectangular building composed of 300 cement bricks. The cement structure is divided by a bisecting wall into 2 separate stalls for each men and women. The entire bathroom facility measures 3 m x 1.5 m, and 2 m tall. The completed cement brick structure was then covered in plaster. Corrugated metal was used as roofing material.

A traditional “squat” toilet was used in each, accompanied by a brick-and-plastered basin to hold water used for flushing with a bucket. This method of flushing is very common throughout Thailand, especially in the Isaan region.

Each of the two basins (one in each stall) receives its water from two large earthen rainwater catchment jars. During the deluge of the rainy season from June to October, rainwater will flow through plastic PVC piping from these 1,000-liter jars and be connected to the bathroom with faucets. During the dry season, the facility receives water through a plastic piping system stretching roughly 25 meters over ground to connect with nearby Lahokgrasang village’s water system. The bathroom features 3 faucets: one to fill each of the basins used for flushing, as well as one faucet on the exterior of the bathroom to be used for handwashing.

Wastewater from flushing is managed in the traditional Thai method but with an environmentally-friendly alteration. 200 cement bricks were used to create an underground septic-like tank to hold wastewater and human wastes. This waste will be composted to safeguard the ecosystem of the forest. Twice or three times each year (as needed and performed by Forestry Group volunteers), the septic-like tank will be emptied and cleaned and the waste collected for composting at a composting site located just outside the community forest.

Project Impact
This project will benefit 720 people per year, including 340 food foragers, 80 conservation group members, and 300 study group members. To date, since project completion, it is estimate that 100-200 individuals have already utilized the services of having a community forest bathroom facility, effectively keeping waste out of the forest as well as prolonging forest visitors’ stay in the community forest.

“With bathroom facilities in the community forest, I know we can host many more people without hurting the forest as we teach and learn.” -Songkram Saenram, Kaokok Community Forestry Group member and Youth Group mentor.

We are grateful to Kale for completing this necessary and well-planned project, and again extend our gratitude to Joe Nowak of Microfarm, Dassow, Germany for providing the funding.