This project has been completed under the direction of Peace Corps Volunteer Whitney Dean. To read about the beginning of the project, CLICK HERE.

The project was to build a rainwater catchment system at the Kilagano Secondary School. 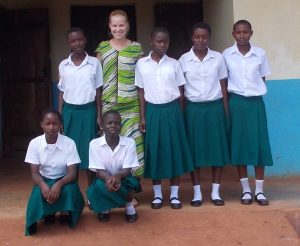 Ground broke for a brand new rainwater catchment system at Kilagano Secondary School in mid-May of 2013. There had been several meetings and discussions on where the tank would be placed. Due to a lack of space in the courtyard of the girls’ hostel, it was decided that it would be placed outside. This would also make the water accessible for all students.

The project began with a few trips into the local town of Songea, in southwestern Tanzania. These trips were to assess and negotiate prices, and finally to purchase the materials, which included five bags of cement at 18,000 shillings each, materials for gutters, adding up to 45,000 shillings and a large black plastic tank, capable of holding up to 3,000 liters of water. This was where the bulk of the funding was used and after serious negotiations the price was settled at 730,000 shillings. After 30,000 shillings for transport, the total came out to 895,000 shillings, about $542.

However, these items were not freely given to the school. Before the project began, the Volunteer, the Headmaster and the Groundskeeper agreed that in order to receive these materials, a contribution must be given by the school. The labor for creating the stand was contributed by the Groundskeeper and a few students. The students carried countless buckets of water from a well, brought bricks to the site from a recently demolished building and aided the groundskeeper in mixing cement and placing bricks.

When the project began, it was estimated that it would take roughly three days to complete the stand. One day for the foundation, another for the base and the last day to add the finishing touches. After a week of patiently waiting for the cement to dry, the tank was finally hoisted on top of the stand. For this, the entire school gathered around to watch. The girls sang songs and danced while the boys clapped to show their support.

The gutters for the rainwater catchment system were another story entirely. It was originally planned to use corrugated tin, the same as used for the roofing of the school, to shape into gutters. This had been done several times before, but the school wanted to ensure quality and asked to purchase a more expensive plastic set of gutters. These were easily attached in one day and have done their job of collecting water every rainy day henceforth.

The reaction from the community was widely positive. It was believed that by placing the gutters on the outside of the building, perhaps others would see them catching water and mimic the system. This has happened on a few houses around the building since the project was finished and a few teachers have stated their plans to repeat the process at their homes.

The most blissful feedback came from those who benefited the most from the rainwater catchment system, the students, mainly the girls. It is customary in Tanzania for the ladies of the household or school to be the ones in charge of obtaining water. This might take students out of classes, away from homework and study sessions, or even far away from the safety of the school after dark.

Once the project ended, it took some time for the tank to fill up. Girls were still carrying water to and from the well and pouring into the tank, since the rains had not yet begun. And although much time was saved, as the girls did this on the weekends and used the water sparingly throughout the week, when the rains began, the tank quickly filled, and it was said by many students and teachers that having water all the time was a great blessing.

We are grateful to Whitney for completing this project, and extend our thanks to her friends and family for providing the funding.