This project has been completed under the direction of Peace Corps Volunteer Rebecca Burleson. To read about the start of the project, CLICK HERE. 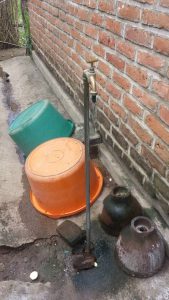 The project was delayed due to complications beyond my control but was finally completed in January.

When Peace Corps first placed a volunteer at Kasinje Health center in 2012, the health center staff made it clear to the volunteer that they wanted to place running water taps in their staff housing. The first volunteer worked for two years to implement this project, but was unable to do so because of a lack of cooperation from the District Health Office.

When I came to Kasinje in 2014, this project was still at the forefront of the community’s concerns. Kasinje Health Center was struggling to attract and retain adequate and skilled staff members because of the poor living conditions. Most health centers of comparable size could boast a good supply of running water, while Kasinje had only one borehole, and it was in such poor condition that community members, including the overworked health center staff, were waiting for hours to draw a single bucket of water.

Along with my counterpart, I began discussions with the Health Center Committee as well as the local leadership (village headmen and traditional authorities). We developed a plan for how the recently installed electric water pump and tank would deliver water to the eight staff houses. We then met with the District Health Office who agreed to send someone to our village to write a quotation for needed materials. After obtaining this we began communicating with companies in Blantyre, our nearest city, to get a price quotation.

The health center’s In-Charge received the project funds, and two staff members traveled to Blantyre to purchase the materials. Community members were then mobilized to dig trenched and install the pipes and eight taps.

It took nearly four years, but Kasinje Health Center now has running water and is already beginning to attract more needed staff members. The quality of life of all the staff has dramatically improved and so has their morale in the workplace. They all tell me happily, “Yes! We are enjoying now!”, and “We are living moyo wabwino with running water!” (We are living the good life with running water!)

We are grateful to Rebecca, for completing this project, to her friends and family who assisted, and to our anonymous donor for providing project funds.