This project has been completed under the direction of Peace Corps Volunteer Shailah Bevan.

The project was to build a rainwater catchment system at the Karugutu Primary School.

My counterpart and I traveled to a nearby town called Olkalou and purchased a water tank, gutters, and cement. We proceeded to transport the huge tank and all its amenities by truck to Karugutu Primary School.

The rainwater catchment system was completed in 5 days.

The head teacher said “This is the best thing that has ever happened to Karugutu.” The children all danced around the tank because they are so thankful to actually have a water resource instead of having to go days without a drop of water.

Thank you so much for funding this project. It has made such a difference in the lives of so many wonderful people.

We are grateful to Shailah for her rapid completion of this project, and look forward to working with her again in the near future. We again extend our thanks to CannedWater4Kids for providing the funding. 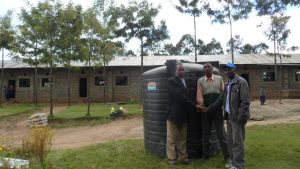 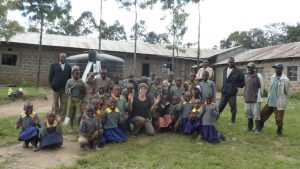