This project has been completed under the direction of Peace Corps Volunteer Anne Benson.

The project was to bring water to the Kalynivka School for use in the cafeteria and bathrooms.

Once funding was received, the village of Kalynivka sprang into action and ordered a drilling team to come to the school and drill for a new source of water. Expert reports had estimated it was ten meters below the surface, but it was fifteen meters below, and therefore slightly more expensive than anticipated.

After drilling, we needed to place the motor we bought at the bottom of the newly-drilled hole that would continuously pump fresher water than the school had had in twelve years. Several community volunteers, as well as I, felt a great sense of accomplishment and excitedly began replacing the old toilets and pipes leading to the sinks. Two new toilets were installed by the same team of volunteers from the village, and I installed the pipes with my counterpart, Olexander Mykolayovich. The new sink piping, though a bit rudimentary, was more than sufficient for our school’s purposes. The students were excited to see the renovation and anxiously awaited being able to use them. 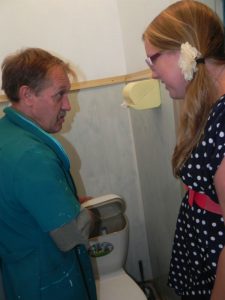 All was completed and ready for use, or so we thought. When we tried to turn on the faucets and flush the toilet, we discovered a problem with the motor pumping the water. The motor did not work, and therefore the sinks and toilet did not work. Thankfully the man who sold us the motor promised to order another and replace ours free of charge. Hope was restored, and we waited on the second motor.

One month later, the second motor was installed and the same tests performed. It too, didn’t work. The size was wrong. What we thought would be sufficient was not enough, and we needed a bigger motor. The difference in price was not too great, and we raised the money needed to replace it. The man who sold us the motors graciously replaced our second motor with the larger size for a nominal fee.

We waited three months for the larger motor to be available in our district. Finally, it arrived and was installed by the hearty volunteers from Kalynivka. Both toilets flushed, and all four sinks had running water for the first time in over a decade.

Students and faculty are now able to go to the bathroom inside, which is especially wonderful in freezing weather with over a foot of snow on the ground. All are able to wash their hands after using the restroom and before meals. Unfortunately, the extra cost incurred from drilling fifteen meters as opposed to ten meant we were unable to purchase the water filter for the kitchen as planned. However, the water from the sinks is cleaner than any the school has had in years. After boiling it is still a significant improvement.

In 2012 Kalynivka School was closed for a week due to quarantine for the flu. This was a common practice during cold months. Since the new facilities have been installed only two students have reported mild cases of the flu. Many teachers and students regularly comment on how grateful they are to be able to use an indoor toilet. The project was a great success. Both the village of Kalynivka and I are grateful to Appropriate Projects for making this project possible, and for the generous donation of Mr. and Mrs. Kirchner.

We, in turn, extend our thanks to Anne for completing this project, and to the Kirchners for providing the funds. 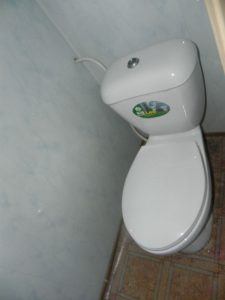