This project has been completed under the direction of Peace Corps Volunteer Katherine Donner.

The project was to improve the sanitation and functionality of the kitchen at the shelter.

I am thrilled to say that project has successfully been concluded! We replaced the old unsanitary kitchen sinks with new and improved sinks brought in from the capital city of Kyiv.

From initial funding, the implementation took a little longer than expected due to the many Ukrainian holidays throughout December and January, but I am happy to report that everything is finished and the community of Izmail is so grateful.

The money from Water Charity went towards the purchase of two metal kitchen sinks, a smaller sink for hand washing and the base on which they stand. We had to purchase some unexpected pipes to connect the new sinks to the established water lines due to the size differences and went $10 USD over budget but the community pitched in to finish the project.

This project will greatly improve the sanitation of the kitchen and therefore healthier conditions for the children who stay there.

The community and my partners at the Social Service Center and the Children’s Shelter are so thankful to Water Charity and the Appropriate Projects initiative.

Here are some comments:

The children at the shelter as a group even yelled so loudly that all the neighbors could hear: “Cпасибо!!” (“Thank you” in Russian).

As the volunteer, I would like to say a huge thank you for the support and the funding for this project. Thank you so much!

We, in turn, extend our thanks to Katherine for completing this project. We are still seeking donations. 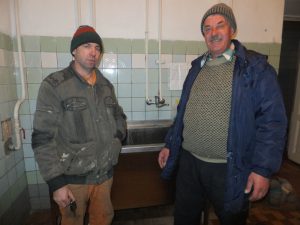 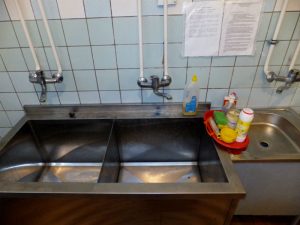