The project was to rebuild the water intake system for the village.

The project has been completed.

With joint support from district and village officials (including the Ilela Village Chairman and Ilela Village Executive Officer), materials (including cement and piping) were purchased in Mbinga District, three hours from the village center. They were transported in partnership with the Tutunze Coffee Company, a significant operator of the piping system currently used in Kitessa Forest, especially during coffee production seasons.

Our work began promptly and on schedule, starting August 21st and ending on August 26th, 2013. The village craftsman assigned to the work, Mr. Pius Kumburu, worked with the Ilela Village Government to design a cement water intake in close proximity to the abandoned intake with significant alterations to ensure long-term sustainability. 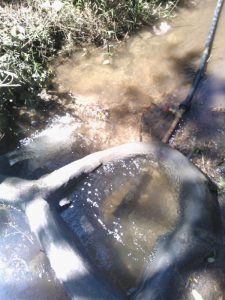 Those modifications included a parallel pipe to the cement structure to provide water runoff during the rainy season. In this way, the flow of dirty water will be prevented from entering the intake where sterile water collects. The abandoned intake did not include this feature.

Secondly, two water filter chambers were established within the tank itself to sift out debris both large and small. While not 100% effective, this is a significant upgrade over the previously-used makeshift dam of mud and stones.

A new piping connector bridges the original pipe leading down to the village center to the intake (which includes a new stop-cork) and the pipe itself is no longer situated in the aforementioned dam unprotected. The positioning of the intake itself is also now directly aligned to accommodate the natural flow of water from the forest.

The only slight alteration was the removal of the plastic bucket in the original design, as it was deemed to be redundant.

Overall, the project in full was a total success. The work was completed quickly, efficiently, and with great diligence. It was also a fantastic learning experience for community members involved in the implementation.

Ilela Village is particularly indebted to Water Charity for the material support. This is the first time in several years that Ilela Village has regular access to water which is safe and sterile and will go on to positively impact the lives of over 10,000 in the village and surrounding areas, including men, women, and children of all ages.

We are grateful to Arik for his rapid completion of this important project. We are still seeking donations. 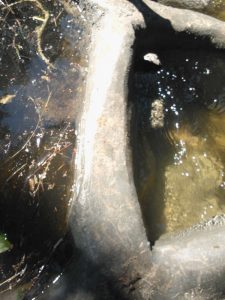 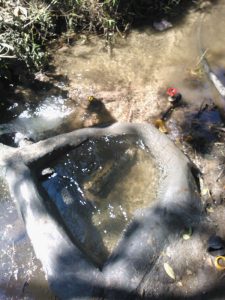