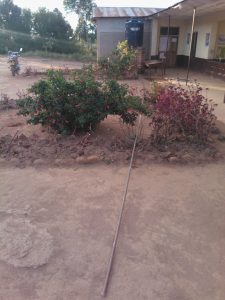 The project was to install a rainwater catchment system at the dispensary.

With joint support from district and village officials (including the Ilela Village Chairman and Ilela Village Executive Officer), materials were purchased in Mbinga District, three hours from the village center, and included the 1,000 liter water tank, cement and piping.

In conversations with the Mbinga District Medical Officer (DMO), Dr. Damas Kayera, and the Mbinga District Malaria Focal Person (MDMFP), Mr. Felix Kinunda, our committee re-considered the prospect of using the plastic tank as a rainwater catchment system, as was incorporated within our original proposal. It was concluded that while the benefits of naturally-accruing water were unmistakable (in that it would provide a natural alternative to the village piping system), this would be offset by an open tank unintentionally serving as a breeding ground for mosquitos, especially with its location being in contiguity to the dispensary.

Additionally, the Ilela Village Dispensary is projected to expand in the next year to become a Ward Health Center. Pending construction includes partial roof restoration in proximity to the tank foundation, thus making it difficult to install a gutter system at present for fear of inadvertent damage and subsequent lack of funds to re-purchase supplies if necessary.

Thus, with malaria reduction and expansion being the priorities, the original proposal was altered slightly to delay the installation of the rainwater catchment system. In the next two years, it is expected that the opening of the tank will be covered with nylon mesh (designs are under consideration currently) and a gutter installed once all planned renovations are completed. In the interim, 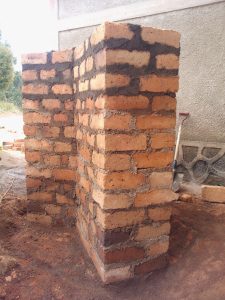 the source of water for the tank will be extracted from Kitessa Forest and transferred through the newly-purchased piping.

Our most pressing issue was labor. While the tank foundation was completed in three days (using bricks, cement, sand, and water), it took over two weeks for the first village carpenter to complete the final preparations needed to connect the plastic piping (intake and outtake valves).

While delays in work are always expected, especially in rural, isolated areas, these appeared to be non-work related and having to do with administrative issues between the carpenter and the village government. Several times, emergency meetings were held to discuss the importance of the work, but to little avail and with no impact on the expediency of the work.

Eventually, this first carpenter was dismissed, and a second was used to complete what work remained without further issue. While frustrating both personally and professionally, the work was completed in full shortly after three weeks and was a fantastic learning experience for community members involved in the implementation.

Ilela Village is particularly indebted to Appropriate Projects/Water Charity for the material support. This safe access to water is already improving the efficiency and sanitation of our work in the dispensary, village and ward-wide, thus positively impacting the lives of over 10,000, including men, women, and children of all ages.

We are grateful to Arik for completing this project.