This project has been completed under the direction of Peace Corps Volunteer Christin Spoolstra. To read about the beginning of the project, CLICK HERE.

The project was to repair an unused well, build a tower, and install a water tank, pump, and piping. 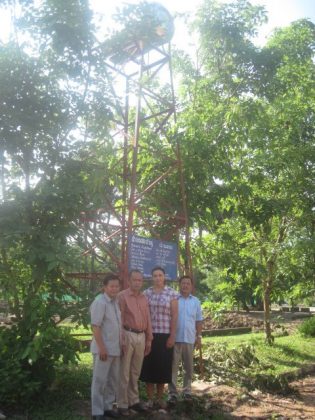 Construction was delayed several times on this project. First, although the supplies were purchased, we needed to wait until the ground dried enough from the rains. Then, construction of the water tank was delayed due to generous donations to our school from a Japanese organization and the ADB.

Due to the building of a new set of classrooms and a resource center, the school decided to change the location of the water tank to make its distribution to the proper area of the grounds easier. They finally completed the project in early May 2014.

With Water Charity funds, they purchased and constructed the iron frame as well as the actual tank for a total of $435.50, leaving $64.40 of Water Charity’s donation. The school put that remainder toward the purchase of the motor and PVC piping, at a cost of around $120 in total. The extra funds came from student and teacher donations as well as from the commune chief.

We are grateful to Christin for seeing this project through to successful completion. She extended her Peace Corps service in Cambodia to continue her good work there, a demonstration of her extreme dedication.

We also again extend our thanks to the donors who provided the funds for the project.