This project has been completed under the direction of Peace Corps Volunteer Stephanie Tatge.

The teachers determined that rainwater catchment was the biggest need and the most feasible project for the school. We went back and forth between the options of buying a large plastic tank from town or following plans to build an underground water tank out of native materials found in the village.

Though the plastic tank would probably have been easier, the teachers thought that teaching the local fundis (carpenters, metal workers, masons) the skills to build this type of tank would be more sustainable for the future water tanks built in Gumbiro village, perhaps on a smaller, domestic scale.

The Swedish International Development Cooperation Agency (SIDA) plans were determined to be the most apt for our needs and resources. The teachers chose a hemispherical-shaped tank design because of its resistance to collapse. Building the tank below ground level reduced the need for much of the materials for reinforcement. They decided to build the tank out of mud bricks, using waterproof cement as the inner coat of plaster.

The students and nearby youth excavated the hole to a depth of 175 cm (5.74 feet) in a hemispherical shape. Then the mason, with the help of a few student assistants, commenced building the foundation and the brickwork in the shape of the tank. 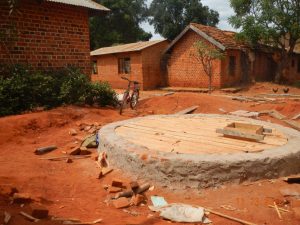 An overflow pipe was fitted into this masonry. A layer of cement – soil (1:8) mortar was applied to a thickness of 5-6 cm, done in two coats and allowed to dry over a period of two days.

For waterproofing, a coat of cement and water slurry was applied on the same day as the final coat of plaster.

The roof was constructed by another fundi, leaving a space for a lockable wooden 50 X 50 cm door for drawing water.

Finally, the carpenter fundi cut and shaped the corrugated iron and affixed the plastic gutters to the roofs of the school buildings, and connect them to the tank.

The village government provided mud bricks for the mason free of charge, and the school provided the oldest students to work for free as unskilled labor (digging, fetching water for cement, etc.) and assistants to the fundis.

The fundis, since this was their first time building a tank like this in the village, did the work at a huge discount. The teachers took an active role in making decisions about the project, doing research, choosing and negotiating fundis, estimating the budget, and planning. Furthermore, the school fed everyone involved in the project on the days they were working.

Due to the anniversary of the assassination of President John F. Kennedy, current US President Barack Obama chose to have a video conference call with five volunteers from Tanzania. As one of the chosen volunteers, I spoke to him about this project and how it positively affects water security in my community. When I reported this to my villagers they became very serious about the quality of the project and reminded me constantly that they had to do a very good job to impress the President of the United States. At one point I heard my principal gently chastising the carpenter for leaving some uncut wire in the fascia saying, “You must clip that so it looks nice for Obama!”

We encountered a few problems with getting the fundis to come, with the original plastic pipe melting in the sun, and finishing the cement work before the start of the rainy season. Overall these were easily surmounted and even though the tank went slightly over budget and took much longer than I originally anticipated, it’s functioning well with no cracks yet.

In addition to using the water for increased sanitation and hygiene at school, the Environmental club at school has plans to start a permagarden, tree nursery, and possibly a chicken project using the water available from the tank.

At this time I’d like to extend a sincere statement of gratitude from me and Gumbiro Primary School to all of you at Appropriate Projects!

We are grateful to Stephanie for completing this outstanding project, and again extend our thanks to the donors. 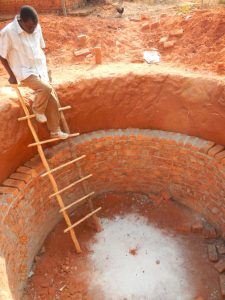 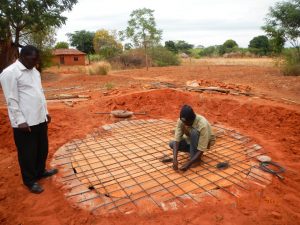 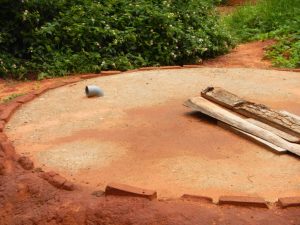