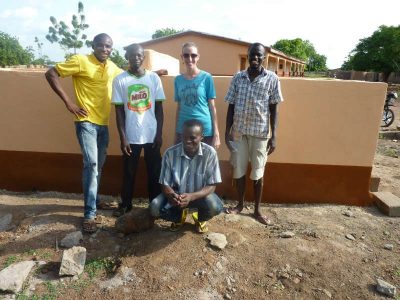 The original project was to build a latrine for the school. However, the project was modified to instead build a urinal pit that could be accomplished within the budget.

Once the funds were received, the project started with the molding of concrete blocks using community members and students to help. The major expenditure here was buying the concrete. After the blocks were started, we quickly realized that the project would need to be modified because prices had increased since the proposal was written. The project went on hold for a while we decided what to do next.

During the interim, we still continued with lessons on health and sanitation of the school. As the health teacher at the school, I was able to incorporate lessons on hygiene, specifically connecting open defecation and standing water to illness, into my normal classroom lessons and encourage other teachers to do the same. We also help club meetings to discuss other sanitation issues such as hand-washing since the school recently bought two tapped containers, one to serve as a place to get drinking water.

It was determined by the project team at the school to revamp the project to instead create a urinal pit for the students to use since this required less materials and we could start by using the concrete blocks. Additional concrete had to be bought for the creation of the plaster to hold the blocks together for the walls of the urinal. A male and female side were created to provide privacy for each gender.

The basic design and technology teacher discussed construction with his classes and oversaw the completion of the project. He also utilized students for hands-on learning. Once the basic structure was created, paint was bought to match the school and improve the aesthetics of the area. The teachers and students were all excited to pitch in to improve the sanitation of the school and make it a “proper school” as the Headmaster asserted.

The urinal pit is now in use at Gbedema Junior High School. The hope is that now that the students understand the importance of hygiene and sanitation, and that they will rally the support of the community to one day to build a school latrine to further improve sanitation.

Thank you to Water Charity for the support to help us complete this project and provide a sanitation improvement to the school!

We are grateful to Stephanie for completing the project, and again extend our thanks to Sheryl Lewis and Stephanie’s other friends, family, and supporters for providing the funding for the project.