This project has been completed under the direction of Peace Corps Volunteer Mary Cadwallender.

To read about the beginning of the project, ClICK HERE.

The project was to replace the broken pump and create a new well cap and pulley system for the central well in village.

The broken pump was removed and a new well cap was completed in Fodé Bayo within the month after funds were received from Water Charity.

Once the project was approved by Appropriate Projects, before the money arrived, my work partners and I confirmed that the laborers and community members were prepared to do the job efficiently. The day after the funds were received a community member and I purchased the cement for the project in Dabo, the nearest road town. 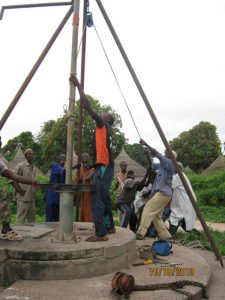 On October 10th, the pump repairman and metal worker came to Fodé Bayo to remove the broken pump and take measurements for the new well cap and pulley system. Four days later, the mason came to make the bricks that would be used to build up the walls of the well. At this time we found out that he had miscalculated the amount of cement needed to build the bricks and cover the outside of the well.

On November 4, the mason returned after a family emergency had kept him from completing his work on the originally schedule date. In one day, with help from many Fodé Bayo men and nourished by the food of the Fodé Bayo women, the mason used the cement bricks to build up the well to hip height, attached the well cap and pulley system, and did the final cement coat to seal the well.

By November 13th, the well was dry and ready to be used. All the people of Fodé Bayo were incredibly grateful and are proud of their new well.

Thank you for your assistance. I received many blessings and danced with a lot of people in honor of this repaired well.

We extend our thanks to Mary for completing this important project, and to her friends and family who provided the funding. 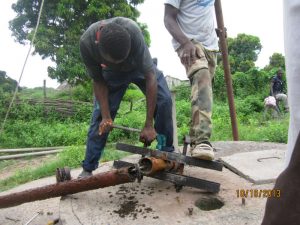 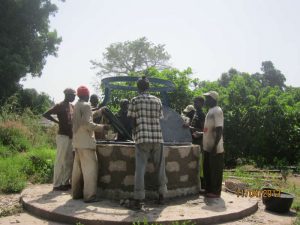