This project, designed to build a well and distribution system at the Ferreñafe Zoo park has been completed under the direction of Peace Corps Volunteer Matthew Wildhagen. 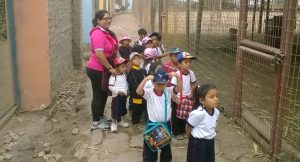 With limited water access and growing needs, the zoological park needed a permanent water source. With the excavation of a well and distribution systems installed, the Ferreñafe Zoo park would be able to better serve its inhabitants, workers and the public.

The work began with the excavation of a 7.2-meter-deep well which took about 10 days and was done completely by hand. Concrete forms were inserted for wall integrity and worker safety. Upon completion the municipality, in accordance with its part of the deal, excavated an additional 6 meters providing enough water for all-day use.

During the time of the additional well excavation, connecting tubing was run to the upper part of the zoo park, to the individual animal pools and to the worm compost beds. Shading was built over the upper irrigation area, and, with the help of Peace Corps volunteers, 3 students and a professor from the University of Nevada, Reno and municipal staff, 1,000 meters of drip line irrigation tubing was installed, providing water to the park’s many native trees and plants. Since the start of the project over 350 new trees and cactus have been planted and over 300 already existing trees were provided with regular and efficient watering.

Many new plants and trees were brought in from local nurseries and donated by the nearby Historic National Park, Bosque de Pomác. The goal is to maintain a green cap over what was previously a landfill. This had previously been attempted by the municipality but had fallen by the wayside due to lack of access to water and changes in government interests.

While rains are infrequent in the Northwest of Peru, it can receive quite heavy downpours during the wet season and the presence of vegetation will help control the amount water infiltrating through the landfill and perhaps to the underground water system. By having the nearby well and regular watering delivered directly to each plant via drip irrigation we have been able to reforest the area without random and excessive flood irrigation which was the previous method.

By using the well at regular intervals we are able to create a cone of depression in the water table and a closed loop system, thus keeping possible contaminants out of the water system and reapplying this water to the plants for further dilution.

With the regular presence of water in the zoo park, employees were able to better perform their jobs, attitudes changed and number of daily visits increased from often in the single digits to over 100. Word of mouth and the creation of a Facebook page helped promote the park. In the nearby poorer district, attitude changed toward the park, which led to significantly less illegal trash dumping. Nearby children now visit on a daily basis, thus increasing awareness. 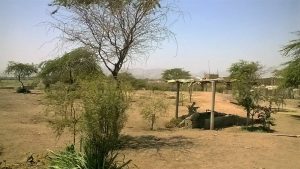 A local school made informational cards to hang in the park about the present animal and plant species, and the zoo park even became the host site for a Christmas charity event for kids who would otherwise not be receiving any presents. Without water, the park improvements would not have been made and none of these events would have transpired.

Daily visits from the towns kindergarten’s and primary schools make up the grand percentage of visitors, with families and couples filtering in and out throughout the day. Visiting has remained free of charge.

After life started to return to the upper areas of the park and a few other events, the local municipal interest in the park greatly increased. What was seen as an abandoned project turned around and once again grabbed the attention of the authorities. Plans have been established for the construction of bathrooms in 2017 and documents have been filled out for the zoo to become an official animal refuge for confiscated, mistreated and endangered animals.

A rather large problem for local police, when confiscating illegally owned animals (parrots, monkeys, etc.), is that afterwards they have few options as to where the animals can be relocated and sometimes they will die in the station. Currently there is a limit to the types of species the zoo can house but with these permissions the park could host more animals and play a bigger role in local animal protection.

A nearby nonprofit has recently showed interest in housing and breeding a local endangered species, the pava de ala blanca or white winged turkey, but would require this documentation in order to continue.

Also, the municipal interest was raised when the park’s two ostriches had 3 babies. This led to a few news articles, videos and communications with an ostrich breeding site about possible future trades and pairings. While these birds might have reproduced with the little water that was previously available, I feel that its presence in a larger and regular quantity really helped create the environment and mood for these bird’s love life.

Efforts With the tubing installed, we were able to transport the worm composting site from a local soccer field into the zoo park. This allowed for project sustainability and growth as well as a place where the public could come a learn about worm composting and its benefits. Previously the worm composting site was in the corner of the futbol stadium outside of town, which made it inconvenient for organic waste deliveries and zero educational visits due to its gated nature. Organic waste collection from the local market has increased, more worm beds have been constructed and employee driving time has been reduced.

I have never seen a turtle smile but if they could I believe that would now do so. Their bathing water, as well as that of the other animals, is now changed daily, rather than once a week at best. The amount of worker time in order to change the bathing water has also been greatly reduced because of installed pipes and spigots. The time to walk back and forth from water tanks with buckets has been greatly reduced or eliminated.

We are grateful to Matthew for completing this important project and are happy to see the changes that it has allowed.