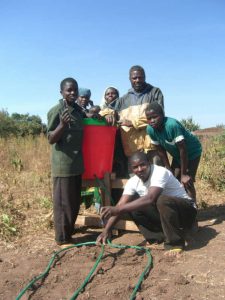 This project has been completed under the direction of Peace Corps Volunteer Duncan Zevetski.

The project was to establish a drip irrigation system for the Every Child CBO garden.

The Every Child: Mndolera Garden Irrigation project has been completed.

A total of 18 watering stations were constructed during three construction sessions in which 10 volunteers where trained in the construction, maintenance and function of drip irrigation systems.

During the first session, the volunteers were shown the proper construction of one station including how to cut holes in the buckets for the tubing, properly sealing all holes and creating individual planting stations for each system. We then gave a live demonstration of how the system will work wherein some problems were resolved, including pressure issues that resulted in the system draining out of the plugged end of the tubing.

Once the a solution was arrived at which involved more properly caulking, plugging and waiting the appropriate drying time before using the systems, the first bucket was placed in the garden and allowed to run until it completely drained, telling us approximately how long was needed before refills, which was about 4 days. This was slightly less time than anticipated but we later learned was due to improper drip rate for most stations. 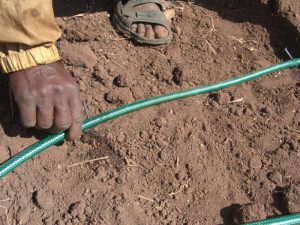 The 2nd and 3rd sessions were spent constructing the rest of the irrigation systems and placing them in the garden at the planting stations. Once all the stations were completed, the volunteers began planting the stations over the next few days.

Over the next month, the volunteers and I monitored the garden to evaluate the effectiveness and efficiency of the whole system, and any problems or issues that arose were resolved. It was during the time that the drip rate was fine tuned for each station to ensure all the plants were receiving appropriate water.

Nearly every watering station successfully germinated new seed with the exception of some garlic stations. This was mainly due to improperly handling the garlic than problems with the watering stations. The stations were equally divided between watering garlic, mustard, Chinese cabbage, onion and tomato. This was rotated during successive seasons with different crops being watered later.

Three additional stations were constructed than initially priced because a bulk discount was given to the organization by a local vendor in a nearby town, Mponela, who provided most of the materials.

Initial tubing plugs were found to fail after a relatively short time, sometimes immediately. This was largely due to not waiting the proper drying time for the caulking sealant before using the system.

To the best of my knowledge, the project is ongoing and in the first year at least was used to feed the children on Every Childs feeding program almost exclusively. However, the first round of garlic production was nearly a total failure. This was again due improper handling of the crop and the difficulty of planting garlic.

My counterpart, Baxter Aimalandiwo, upon completion of the project, told me he planned on constructing a similar system for personal use in his nursery beds.

All together, the community seemed excited and pleased with the project, with many observers commenting during the construction sessions as they were held in the garden rather than behind closed doors.

We are grateful to Duncan for completing this project, and again wish to thank the Elmo Foundation for providing the funding. 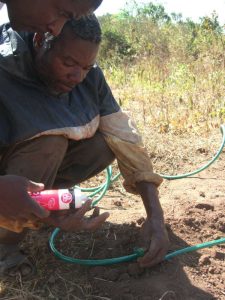 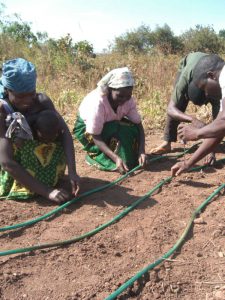