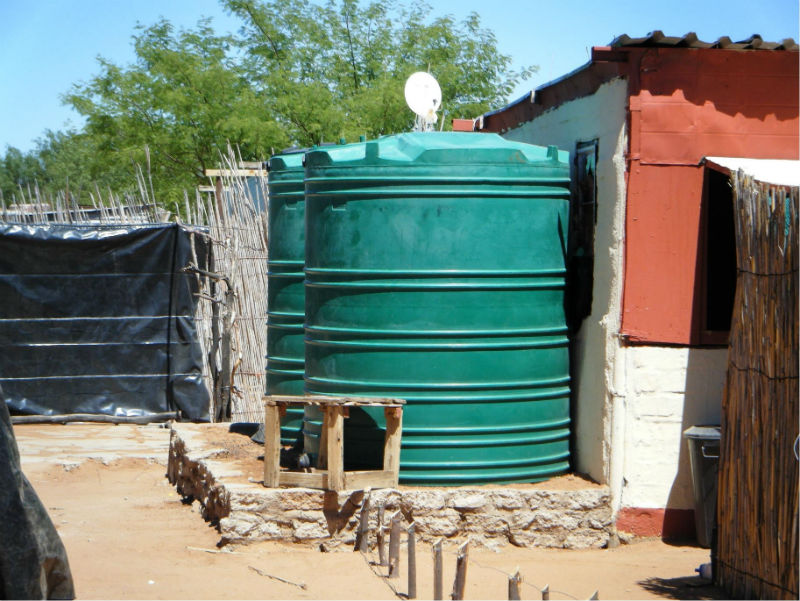 This project has been completed under the direction of Peace Corps Volunteer Amanda Miller. To read about the beginning of the project, CLICK HERE.

This project was to build a rainwater harvesting system for the Early Intervention Programme (EIP) Community Garden.

EIP Founder Ben Motlata and I worked together to get quotes for the materials and secure the materials from local businesses. The people at Bargain Builders in Gobabis were especially helpful and even gave us a discount when I told them the scope of the project.

Ben was very resourceful and helped me to find the best materials for the right price. The garden project is something very close to his heart.

The community was very interested in the work we were doing. Children and people passing by would ask Ben why he had such large containers in his yard and what he planned to do with them.

One youth, Benny, told another kid on the street that they were going to gather water and save money. Benny was an active participant in the garden project. Although Benny was struggling with food and a safe place to sleep, I would see him in the mornings at the garden watering and weeding. Alfonse was another very active and appreciative teenager. He worked hard at the garden and helped Ben and I construct a large compost pile.

When I completed my service as a Peace Corps Volunteer, another PCV helped Ben with the finishing touches of installing the rain gutters. Ben used the rain water collection system to water his garden for nearly five months, helping him get through the dry season.

About ten months after the rainwater collection tanks were erected and the rain gutters installed, Ben was robbed, and he was forced to move his garden into town for the safety of his family and the youth living on the streets that he works with.

Ben moved the rain water collection system to a new plot of land where he continues to farm his crops. The system has helped Ben to cut down on costs of growing food for himself, his family, and the youth (living on the streets) he works with. He struggles to use the water sparingly during the dry season due to all of the demands for water, but the project remains a model that others can replicate.

We are grateful to Amanda for completing this project, and wish her the best in her career.