This project has been completed under the direction of Returned Peace Corps Volunteers Dick Steeper and John Dickson. 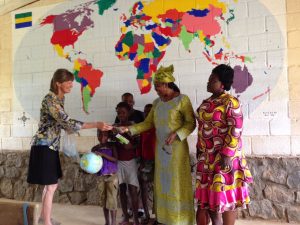 Encore de la Paix is an organization of Returned Peace Corps Volunteers, families, and friends who are conducting volunteer projects in rural Gabon as a way of reconnecting with the country and people who warmly welcomed many of us as Peace Corps Volunteers decades ago. In 2015, following successful fundraising, Encore sent its first team to Doumandzou, Gabon to restore a dilapidated primary school that was built by Peace Corps in 1965. The success of that project led to a similar project in 2016 to restore a second Peace Corps school in the nearby village of Sam. Given the proximity of the two villages, Encore proposed building sanitary facilities for the Doumandzou school at the same time, and we were fortunate to receive Water Charity funding for that proposal.

The goal for this project was to build safe, convenient, easily cleaned, and odor-free latrines for the renovated school in Doumandzou. These toilets, in conjunction with handwashing stations, enhance and promote personal hygiene. Prior to the project, there were no sanitary facilities at all for the children, creating a substantial inconvenience and obstacle to school attendance. Girls likely face greater barriers to completing school, and the project was devised to diminish such barriers.

The latrine project also gave Encore de la Paix a welcome opportunity to renew ties with residents of Doumandzou during the project. Villagers hosted us in their homes, masons worked alongside us on the latrines, and a dozen children assisted with a mural for their classroom. 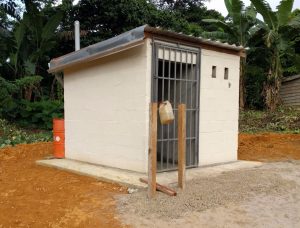 Progress
Project planning began soon after Encore volunteers returned from the Doumandzou school renovation project in early 2015. Contact with Water Charity was established at the Peace Corps Connect 2015 meeting in Berkeley and a funding proposal was subsequently submitted and accepted by the organization. Detailed planning commenced at that point, including drawings of the proposed latrines based on models provided by CARE, material lists, and work schedules. Our Libreville-resident Encore member coordinated planning with the village and began the purchase and delivery of supplies in early 2016.

As part of their contribution to the project, a team of villagers dug two pits prior to the arrival of Encore volunteers. To avoid the danger of wall collapse, the digging was stopped at two meters deep, while the area was increased to achieve the target 20-year lifespan for the latrines. Construction began by lining the 3-m-square pits with cement blocks provided by the village and then capping the pit with a reinforced concrete slab.

On top of the slab, 2.6-m-square latrines were built using village blocks reinforced with cement-filled columns at the corners and bond-beams at the roofline. Single-pitch aluminum roofs were fitted with plastic gutters and downspouts to collect and store rainwater in a 200-liter barrel at the rear of each latrine. A 10-cm plastic vent tube runs from the pit up through the floor and roof for control of odor and insects. Entryways to the latrines were made labyrinthine to permit hands-free access to the facilities, and the similarly hands-free washing stations were conspicuously located just outside. The few liters of water per day needed for the stations come from the rain barrels. Finally, iron gates were fixed to the buildings to block animals and control access as needed. The total cost for the project was $5000 with $3000 provided by Water Charity and the remainder came from Encore de la Paix fund-raising. 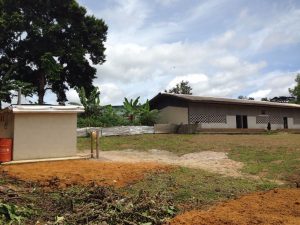 Accomplishments
During the 6-week project, two Ventilated Improved Pit (VIP) latrines were built next to the renovated Doumandzou primary school. The design reduces fly infestation and odor and encourages hygienic toilet practices. The capacity of each latrine was scaled to provide an estimated useful life exceeding 20 years.

Based on village opinion, and with the intent to ensure privacy, safety, and comfort for both genders, two separate latrines were constructed rather than combining them into a simpler single unit.

Handwashing stations based on the “Tippy Tap” foot-operated design were placed immediately outside each latrine to encourage proper cleanliness. The low-tech stations are simple for students to operate and will be easy for the village to maintain.

At the inauguration ceremony, Gaston Biyogo, a Ministry of Health official who grew up in the village, said, “When something is good, we must say it is good. These latrines are very, very good.” He went on to praise the latrines as a model that every village should have, because of their long-term health impact.

As an auxiliary activity for the benefit of the school, two Encore volunteers coordinated the creation of a world map mural on one classroom wall. A dozen students enthusiastically participated in the project, creating a geography lesson that will last for years, as well as vivid memories shared with the visiting volunteers.

At the end of our stay, ceremonies were held in both Doumandzou and Sam to inaugurate both the newly renovated Sam school and the Doumandzou sanitary facilities. Drumming, dancing, speeches, an opulent banquet, and large crowds highlighted the success of our collective effort.

We are grateful to John, and to Encore de la Paix, for completing this great project. It demonstrates the continuing power of the Peace Corps community 55 years into this historic quest for world peace. 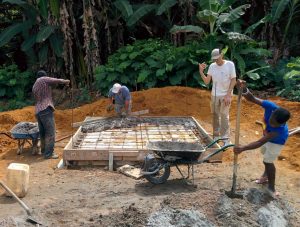 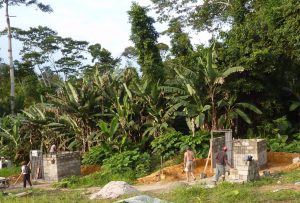