This project has been completed under the direction of Peace Corps Volunteer Jackie Allen.

The project was to build and install 45 “tippy-tappy” handwashing stations, one for each compound in the community.

The Diara Pont health worker, whose wife presented the project idea to me, created a list of households interested in constructing a “tippy-tappy.” Since all compounds were interested, the health worker spread the word for all households to gather sticks for the base of the handwashing station, while I went into Kedougou to buy the rest of the project materials.

I was able to obtain the rope, iron wire, and soap at local boutiques, although I had to put in an order for the plastic tea kettles. When they arrived a week later, I hired a “pous-pous”, a man-pushed cart to transport the materials to the garage, where I paid for them to be loaded on the van, and waited until its departure.

Upon arriving in Diara Pont in the late afternoon, a woman heading back from the fields helped carry the materials to my hut. My second trip I was assisted by a man and a boy, also on their way home from a day of working in the fields.

I went to the compound of the women’s group president where many villagers were gathered processing corn, as the harvest season is upon us. Happy to hear about the arrival of the materials, she scheduled a meeting for instruction on construction and distribution the following day.

Seeing the bags of materials, visitors to my compound asked what they were for. When I explained, common responses were along the lines of “That is very good. Hand washing is important for the children, me, and everyone. This is very good. Thank you. When is the meeting? You work very hard!”

The next morning, with the help of my younger host sister and brother, we filled the tea kettles with soap, iron wire, and rope. That afternoon, villagers gathered at my household where the local health worker explained how to build the simple “tippy-tappy”, and talked about the important times to use them. Following a prayer from the village chief and many thanks, the meeting concluded. Then, I read off the names of the previously compiled list and handed out the pre-stocked tea kettles.

Over the coming week, I visited villagers to see the installations. Within a few days, my siblings were already using the hand washing station religiously.

We are grateful to Jackie for completing this project, and are happy to enable this low-tech, high-impact, project. 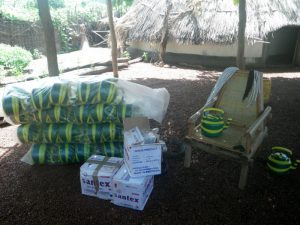 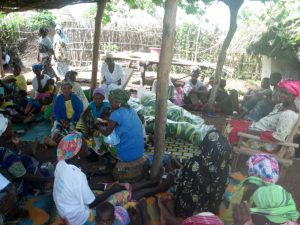