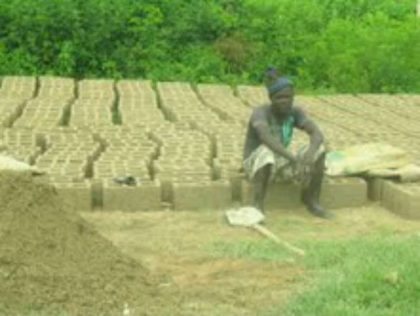 The project was to build a well at the Diakhaba Health Post.

The Diakhaba Health Post Well Project has finally been completed! The people of Diakhaba were beside themselves with gratitude that Water Charity funded not one, but two wells in their village (the first being at the local primary school).

The Infirmiere Chef de Poste, Kaoussou Diatta, hired two local villagers to do the labor, one of whom had helped with the well at the primary school. The materials came from Kedougou, 30 km away, generously transported free of charge by a local chauffeur. The village was determined to help out in whatever way they could, including the small children, who may have been lacking in muscle strength, but they had plenty of enthusiasm!

The whole process took a bit longer than expected. Digging began before the rainy season was over. Most of the digging was done, yet we had to wait until the rains were finished to dig the last part. Then, the main digger was called away for work in another village, and as he is the best well digger in town, we decided to wait until he got back to go forward with the project. During that time, the new well at the health post was much discussed amongst the villagers, as they excitedly waited for it to be completed.

When the project was finally completed, a small meeting was called to bless the new well, and all the people involved, most importantly Water Charity.

The well is completed and water is confirmed to be plentiful and clean. This is so necessary, particularly at the health post, where clean water ensures a happy, healthy population.

We are grateful to Chrissy for completing this project, and again wish to thank the Paul Bechtner Foundation for providing the funding.