This project has been completed under the direction of Peace Corps Volunteer Rachael Honick.

The project was to build 10 pit latrines in Coumba Diouma.

Prior to the completion of this project, there were only 4 cement-reinforced latrines in the entire village of Coumba Diouma, a village with a population of about 325 people. Consequently, people would use the woods or fields, as there was no other option. They would not bring water or soap with them and, as a result, sanitation-related diseases spread quickly throughout the population, especially among children.

Before we embarked on this project, a committee was formed to oversee the execution of every step of the project. Several meetings were held prior to purchasing the materials, and responsibilities were delegated to each household involved: a collection of a monetary contribution to help unforeseen costs as well as providing certain tools and equipment for the project. 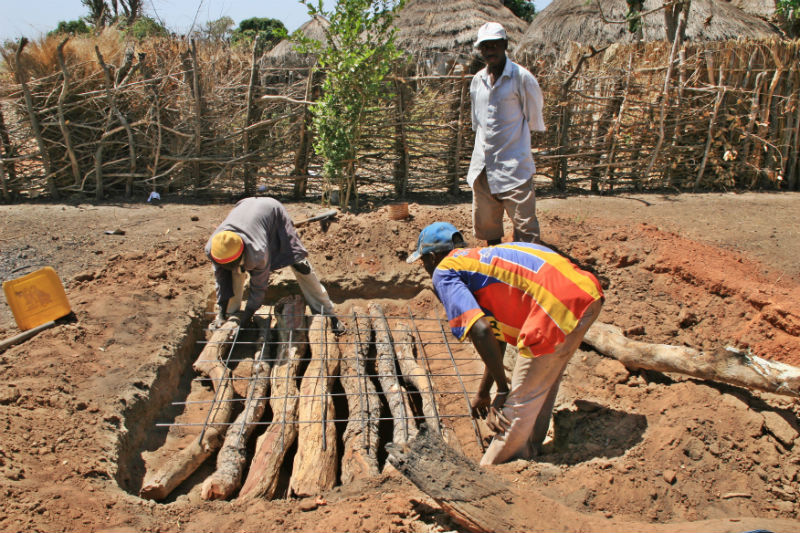 To maximize efficiency for the mason when he began his work, each participating household also had to dig their own pit for the latrine before the materials were bought. Each family contributed 2 million fCFA per latrine, dug the pit for the latrine, brought sand and water for the cement mixture, and helped the mason make the cement and build the latrine. While building the latrines the mason instructed each family on proper maintenance and care for the new latrine to ensure longevity.

The materials were purchased and transported to Coumba Diouma with the help of a local NGO which provided a truck and chauffeur free of charge. We had enough money to buy materials for 10 latrines, factoring in the cost of each material and the cost of the mason.

The majority of the project went unbelievably smoothly. The mason, his assistant, and the head of the household, Mbarrou Camara, worked together in the hot sun to build the first sturdy latrine in Coumba Diouma. After that first day, one latrine was built every day until the project was completed.

After surveying each completed latrine, all are in excellent condition, and the families clean and care for them every day. Having talked with each family about their new latrine, it is clear that a change in behavior has already taken place: the families who have new latrines have ceased using the woods or fields for their bathroom purposes and always have a bucket of water and soap in their latrine area which they use every time.

Having discussed the building of the new latrine with Mbarrou Camara, he was thrilled to have a new latrine. He no longer worries about where his 4-year-old son goes to the bathroom because he knows he uses the latrine every single time. His wife, Siraboye, thanked the project because it educated her about always using soap and water after going to the bathroom. Since the completion of the project, she no longer has diarrhea from not washing her hands and knows it is because the latrine committee educated her about the importance of maintaining hygiene.

We extend our thanks to Rachael, and again express our gratitude to The Soneva SLOW LIFE Trust for providing the funding.