This project has been completed under the direction of Peace Corps Volunteer Nicholas Shen. To read about the beginning of the project, CLICK HERE.

This project was to construct 7 handwashing stations at the most critical places in the community of Baolala. 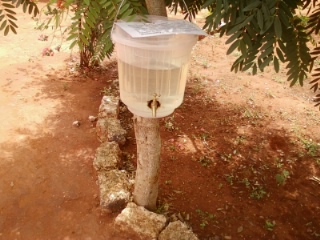 The Baolala Hygiene Project was started in October, 2010, in collaboration with the Water Charity organization’s Appropriate Projects sector, due to the massive influx of patients visiting the Health Dispensary for cases of diarrhea. The Baolala Health Dispensary alone counted 13% of the entire community coming into the dispensary for diarrhea treatment per year, and this does not include those who didn’t report their sickness.

This project consisted of 7 hand washing stations to be constructed and located at the most critical places in the community. Each station included a 20 liter water tank with tap, a laminated sign with a description of why hand washing is important in Swahili, and a supply of soap. Stations were placed in the health dispensary, staff quarter housing, 2 public pit latrines/restrooms, and 3 food serving areas. These areas have been chosen because of the high traffic of people and also the high risk of ingesting contamination.

Nicholas further reports on how the project was received by the community:

After this project was completed, community members personally came to me and conversed on how much they appreciated the project. The mamas at the food serving location were especially grateful and many other members of the community soon after began to ask if they could have one made for their personal house (perhaps that could be a continuation to this the project).

An estimated 3,384 people will benefit consistently from this project. This consists of the people coming to the Baolala Health Dispensary, those using the public pit latrines/restrooms, people living in staff housing, and patrons of the public food serving areas.

The idea that a little goes a long way didn’t really occur to me until this project was implemented. With only $350 an entire community of people have had their lives changed in a simple, but great way. Something as simple as setting up stations for people to wash their hands is a great example of how basic needs in rural communities can be met by basic project implementation.

Nicholas expresses his gratitude for the support of Hack & Slash, and their featuring of his project at their recent event:

I want to thank Spencer and John for funding this project and bringing it home to America. I would also like to thank Amy Lewin Coots for organizing this message and the cast and audience for listening and perhaps taking something positive out of this message. Whether it be engaging in volunteer domestic or international, involving yourselves in the Water Charity organization, or just appreciating everything and everyone in your lives this holiday, I want to say thank you again for your time and happy holidays. 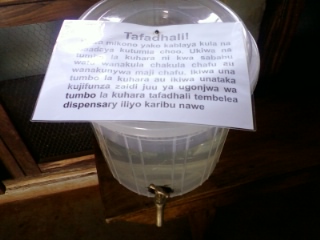 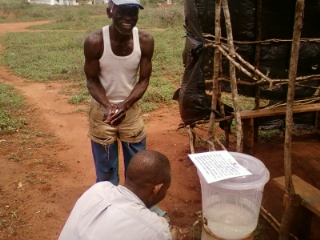