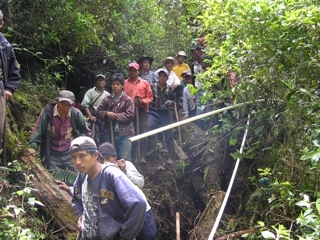 This project has been completed under the technical direction of Peace Corps Volunteer Nicholas Jurich. To read about the beginning of this project, CLICK HERE.

The project was to construct a spring box at a new spring site, to collect the water from the spring, and to run piping to the main holding tank of the existing system.

After purchasing the materials (several bags of cement, a saw blade, pipe glue, and PVC pipes (the majority of the purchase), the community decided that the work date would follow several weeks later.

This past Thursday we began and completed the construction. Nearly seventy men from the two communities collaborated in the work that lasted five hours.

Several small groups worked to lay the tubes and dig the trenches in which they were then buried. Another group of men worked at the new spring, forming a sort of water catchment box with wood planks and large stones.

I had explained that at the new spring we would be constructing a spring box made of cement in order to collect the water. However, upon viewing the new water source, we found that the construction of a spring box would not be appropriate. I had been told that this new water source is a spring, but in actuality, it is a solid stream, almost a small river.

The solution of the community, then, was to direct the majority of the water in a small pool of the river to the one side in which the supply tubes were secured. A lead tube is securely placed in the pool in a solid flow of water that will remain constant, even through the dry season.

The new tubes travel across the mountainside to connect to the existing supply line that leads to the main holding and distribution tank. The new connection is already providing water to the village.

In regards to the cement that I had included in the cost of the project and that we had actually purchased, our plan is to use those two bags of cement to complete another small water project at the school.

The current water tank/wash basin at the school has been in poor repair for a long time, so the cement will serve to replace the drainage and fill holes. Also, the water faucet, for a reason completely unknown to me, does not fall into the storage tank, so our small repair project will correct this as well.

On behalf of the community, Nicholas proceeded to extend his gratitude to those who made the project possible.

We are grateful to Hope You Like it for providing the funding for the project. We also wish to thank the friends of Nicholas Jurich who donated additional funding that was applied to other Peace Corps projects in Guatemala.