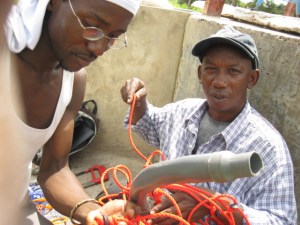 This project has been completed under the direction of Peace Corps Volunteer Marcie Todd. To read about the beginning of the project, CLICK HERE.

The completion of Saare Gouna happened almost a month ago and was the first pump to be successfully installed solely by my Senegalese counterparts. It is a bit late in the follow up because I came down with Malaria and have been recovering the last few weeks.

Barry, Lugman, and myself made a plan to head out to Saare Gouna, when I started to get feverish. I called to break our plans, but Barry said, “Let us go and if we have questions we’ll call.” They seemed so excited at the prospects of doing an installation on their own, so who was I to turn them down? They came by my house, picked up all the necessary supplies, and rode off, Lugman holding the bag on the back of Barry’s scooter. 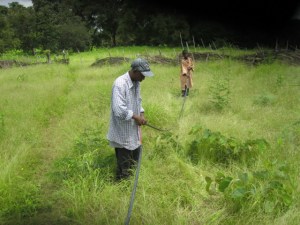 Here is an account from their point of view:

“The affair started slow. It was a hot day so not many people wanted to work. We found two of the women’s husbands to come and help. We carried the piping from its storage place in Samba Thika to the garden and started fitting them together.

We threaded the rope through the pipe and tried to lower the pipe. We then realized we did not wait long enough for the glue to dry and the pipe started breaking. We pulled it out, re-glued and waited. While we were waiting some women came with ataya so we took a break. After the break, we put the pipe back down in the well and tied off the rope. We gave the pump a test, but the rope was too loose so we tightened it and tried again. This time water came out and everyone was happy.”

In two weeks we will go back and check out their work. I am so proud that they’ve learned the system and can go out to do the work on their own. Our team is truly starting to hit its stride!

Total Number of People Benefiting: 29 garden members directly and all of their families indirectly.