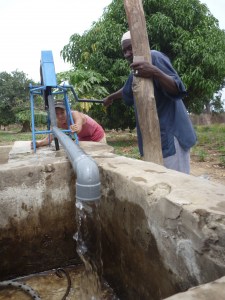 Probably the hardest part of this project is the fact that Marcie and I are installing a new pump every week. That might sound pretty obvious as the project is titled 52 Pumps in 52 Weeks, but nevertheless I find myself a little surprised every time it’s my turn again to install a pump. Also, fresh off the trials and tribulations of Massarinko and hearing of Marcie’s rainy season and welder woes, I wasn’t feeling quite ready at the beginning of this week to tackle yet another installation.

Such is life however and the relentless march of time waits for no one.

Due to other projects and scheduling problems I wasn’t able to come to Karang when the group was making the well cap, which added to my nerves, and rightfully so because when I got there it just wasn’t quite right. The cap was too thin, and the bolts securing the pump into the cement weren’t holding very well. We decided to go ahead with the install anyway though, and see about repairs later.

We started by cleaning off the bottom of the cap, and then lifted the entire half cap and pump onto the well. We installed the piping and the rope and amazingly encountered none of the exasperating problems of the previous pump. 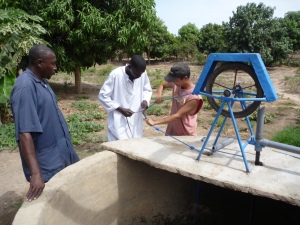 I started to feel a little more confident, which is always a bad sign. The install took all of about 30 min and then we were ready to try the pump. You’ve probably guessed by now that it didn’t work. Well you’re right. For some reason the wheel was spinning but it wasn’t able to grip the rope, and thus the pump wasn’t bringing up water. We fiddled for a while and eventually decided that the knots on the rope were too far apart this time so the wheel didn’t have anything to grip except for the slick rope. I told everyone that I would be back in a few days with a new rope so that we could finish the install.

I went back to village that day a little disappointed, and more than a little tired, but determined to do right by the group and get the pump up and working as soon as I could. I bought more rope and tied the knots at a closer distance. In the end this rope turned out to be probably my best yet. The distance was great, the knots were smooth and small, and the whole thing passed easily through my now correctly sized test pipe.

I returned triumphantly a few days later with the new rope only to find my fellow PCV Byron standing in a little pool of water next to the well. I asked him where it had come from and he proceeded to turn the wheel of the pump and spill copious amounts of water everywhere without even the slightest hint of slippage on the wheel or any other mechanical problems. I looked at him and said “Alhamdulillah” (Grace be to god). Sometimes there’s nothing else to be said. I’ve been thinking a lot about this, but I honestly can’t say why the rope was slipping a few days ago and now it isn’t. For once, chance worked in my favor, though so I’m not complaining. I’ll take the win.

The well cap still has a few problems so while we’re posting the completion now I will be back to reinforce it with another layer of concrete next week. We’re holding off on measuring the output until after this because as is, the pump is really wobbly in the thin cap and we can’t get it up to speed to measure the full output. Check back and it will be updated soon. 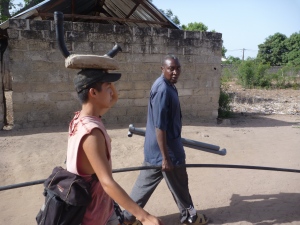 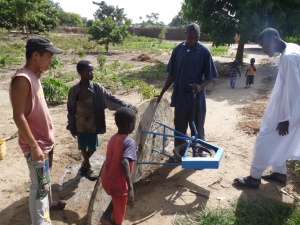