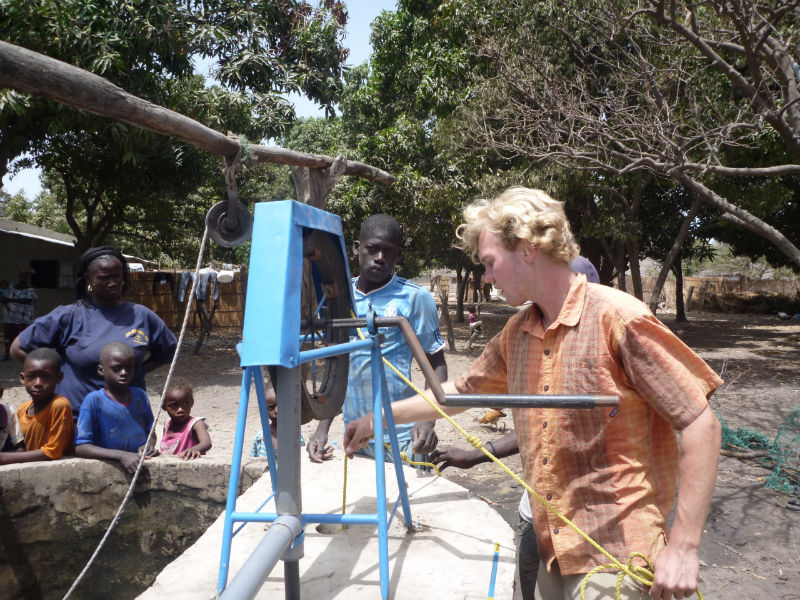 Murphy’s law states: Anything that can go wrong will go wrong. This week I have been fully convinced that this is true. Rest assured the pump is now working, but we said that we would talk frankly about our problems with this project so let me tell you a story.

The morning started out very smoothly. The local Peace Corps Volunteer Will, his counterpart Lamine, and I all went out to the well to check on the half cap we had cast earlier in the week and it looked great. We tipped it up, washed the sand off the bottom and placed it on the well. So far no problems. Suddenly though one of the village children decided to be helpful and carried the cement and PCV turn around block over to me and dropped it at my feet. It had only been cast a few days earlier and now bore a sizable crack from end to end.

Lesson one for the day: don’t let children touch anything!

This was not a huge issue however, so we duct-taped the block to make sure it wouldn’t crack further and then moved on to the next task. This is where everything went wrong. Firstly we threaded the rope the wrong direction through the PCV pipe so that every connector, instead of allowing the rope to smoothly pass from one piece of pipe to the next, was catching the knots. We had to pull the entire apparatus out of the well, flip the pipe around, and re-glue everything.

Lesson two learned: double-check everything before you glue! 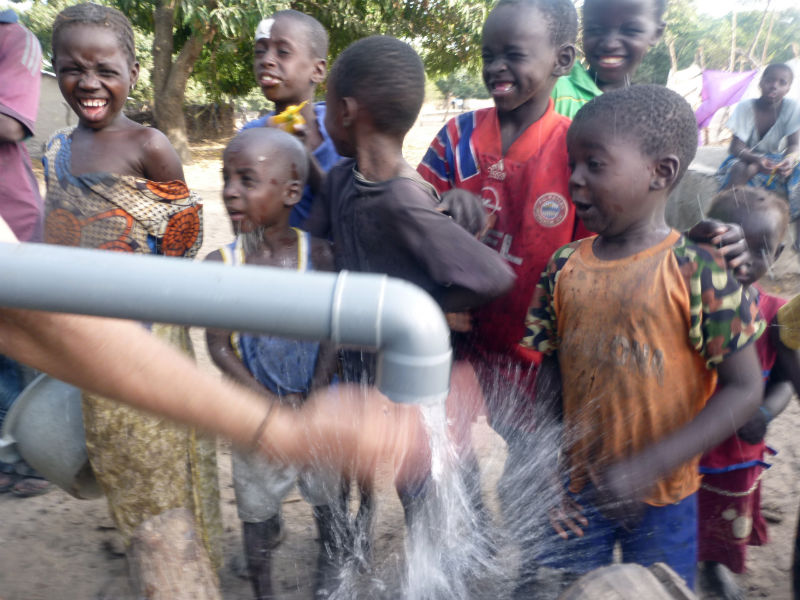 The next problem flabbergasted us for about an hour. The rope kept getting stuck again and again even though everything was now going in the right direction. We pulled everything out of the well a second time and it turned out that this time the problem was too much slack. The extra rope was getting tangled on itself and in this instance a section had actually folded over and gotten stuck in the PCV pipe. A little trimming and a second round of re-gluing and we were ready to drop everything back in the well.

Lesson three learned: too much slack can, and therefore will, cause problems.

With everything doubly fixed we prayed that the pump would just work, but of course it didn’t. The wheel was really hard to turn and the output just wasn’t very good. We discussed and tried to find quick solutions before we finally resigned ourselves to pull the piping and cement block out of the well for a third time. By now we were all exhausted and many of the villagers wanted to wait until the next day to finish, but Will, Lamine and I were determined, if not a little stubborn, to get it working.

This final problem was due to the knots themselves. I had tested their size using a piece of regular PCV pipe, which I realized in this moment, is ever so slightly larger than the higher quality pressure PCV we were using here. The knots were too big and that little bit of extra friction was really adding up over the entire distance of the well. We pulled out the rope and Will and I rushed to his hut to melt and reshape the knots until they were small enough to pass smoothly through the pipe.

Finally we were at the moment of truth… take 3… We lowered everything down, tied off the ends of the rope, and started to turn the wheel. Water! Yes this time it finally worked.

The village instantly forgot about the hardships of the day and started filling their basins and trying out the pump. They were absolutely thrilled. Even through all the frustration this was actually a very useful day as all of these lessons were really important to learn. It was also an excellent way to teach the village how to repair the pump and the kinds of things that might go wrong. Yes sweet are the uses of adversity, but next time Murphy how ‘bout you lay off a little.