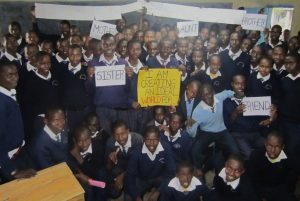 Community Description
Chebunyo is one of the largest trading centers in the district. It is located about 1 ½ hours off the tarmac road. Despite the lack of infrastructure, people come from all over the South Rift region to trade and sell livestock, dairy, foods, and other materials. The community is made up of the Kipsigis people.

Chebunyo Secondary School opened in 1978. This institution consists of over 360 male students and 42 staff members. The students of the school received the 5th highest score out of 38 secondary schools on the KCSE. Over half of their students go on to attend University.

Problem Addressed
Chebunyo Secondary School is one of the institutions that the rest of the educational community looks up to. They have more cemented water tanks on the school grounds than other schools, and have a successful electrical pump system to fill the tanks with water from a nearby water source. However, the school lacks a good hygiene and sanitation education system. 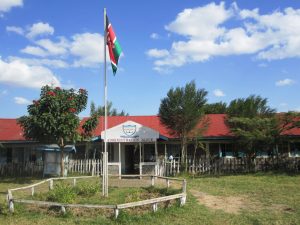 The school nurse sees several cases of waterborne illness each term. The drinking water is treated, but there is no means of proper hygiene practice after using the toilet. The school has several toilets spread out around the grounds, which increases the chances of fecal-oral contamination.

Project Description
This project is to install 3 handwashing stations on the school grounds.

One 750-liter tank will be installed near the boy’s dormitory, and two 500-liter tanks will be placed at two of the most visited latrines on the compound.

Wooden platforms will be constructed on which the tanks (with taps) will be placed. A tin roof will be built and gutters will be attached so that rainwater can be harvested during the rainy season.

The school will provide the labor done by a local carpenter, and the stations will be maintained by the school staff. 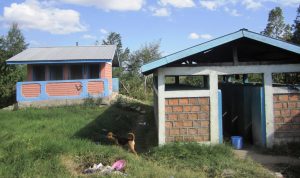 Water Charity funds will pay for the tanks, as well as materials used to construct the platforms, roofing, and gutters. Upon completion, the Peace Corps Volunteer will give the students and staff a lesson on hygiene and how to properly use the handwashing stations.

Project Impact
402 people will benefit from the project, including 360 students and 42 staff members. Visitors to the school will benefit as well.

This project will have a widespread impact, allowing the entire school population to practice proper hygiene, thereby reducing illness.

Dollar Amount Needed
$0.00 – This project has been fully funded through the generosity of the Jesse Twyman, of Guyton, GA, USA.

We encourage others to continue to donate using the Donate button below, and we will notify Peace Corps Volunteer Cassidy Twyman of your donation. Additional funds will be used to fund the next project by Cassidy and/or those of other PCVs in the country of service.