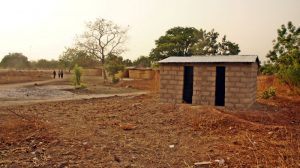 This project has been completed under the direction of Peace Corps Volunteer Curtis McCoy. To read about the beginning of the project, CLICK HERE.

The project was designed to build an 8-stall latrine at the CEM de Pakour.

Completing the Latrine Project at the CEM de Pakour proved to be much more difficult than originally envisioned. However, after a revision of plans, a 4-stall latrine of better quality was built.

Digging started promptly for the latrine project, yielding quick completion of the hole with a cement cap. We decided that having four available stalls would be sufficient, and would enable the construction of a more sustainable structure.

The original plan was to save money and partition the stalls with woven bamboo fencing, but the headmaster revised the plan to cement walls and a roof, with the difference paid for by student registration fees.

While waiting on registration fees, in response to a delay in the promised high school and subsequently an insufficient number of Arabic teachers, the CEM de Pakour was plagued with a number of student strikes. In the first four months of the school year, the students attended an accumulated single month of school. During these strikes registration fees also continued to go unpaid.

With the arrival of spring and the meeting of student demands, school resumed at a normal pace and registration fees were accumulated.

We wish to thank Curtis for completing this project under extreme adversity, and again wish to thank The Soneva SLOW LIFE Trust for providing the funding.