This is a project to be included under the Central River Region Handpump and WASH Improvement Program – The Gambia. Under the direction of Returned Peace Corps Volunteer Jeremy Mak, in addition to the repair of non-working pumps and the installation of new pumps, a series of small WASH projects will be undertaken to improve general water distribution, storage, drainage, sanitation, and hygiene in the region.

Community Description
Brikama Lefaya is a small ethnic Fula community home to 39 villagers from 3 households. Villagers depend on traditional coos and groundnut (peanut) farming and cattle-rearing for their subsistence livelihoods. However, the area is extremely poor, with malnutrition highly prevalent and sickness common. Because of the tiny size of the village, it has often been overlooked by the government and outside agencies for development projects. As such, the village is largely marginalized and under-served, even by Gambian standards. 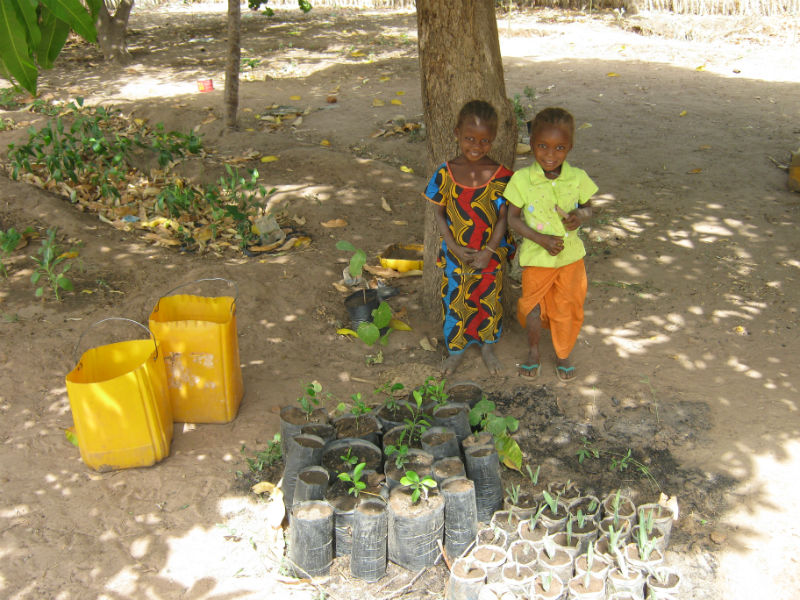 Of the village children, more than half of them exhibit symptoms of kwashiorkor from protein deficiency, and skin infections from poor personal hygiene practices are common. Overall food security is highly unstable, as crop harvests depend on unpredictable rain. In addition, while village women traditionally tended to riverside rice fields during the rainy season, they have abandoned their plots a few years ago due to saltwater intrusion.

In response to these growing malnutrition challenges, the village is slowly but surely starting to diversify its food sources. Jaye Jallow, one of the villagers, has worked with Returned Peace Corps Volunteer Jeremy Mak since early 2011 to establish a wood lot, plant a supply of nutritious moringa and pigeon pea trees, start a fruit tree nursery, and inter-crop numerous cashew trees for future income generation and enhanced food security.

In April 2012, the village also started a small women’s garden to supplement their diets. The replacement of an old Mark II handpump with a new Dutch Bluepump from a Water Charity project earlier this year helped increased Lefaya’s water security and the community’s ability to support its gardens and tree nursery. However, Lefaya still has a long way to go in strengthening their livelihoods and securing options for a better future.

Firstly, with no access to running water, collecting water is an everyday, persistent burden for villagers who depend solely on a manual handpump for their domestic and gardening water needs. Specifically, this burden rests mostly on the shoulders of women and girls, those traditionally responsible for fetching water. 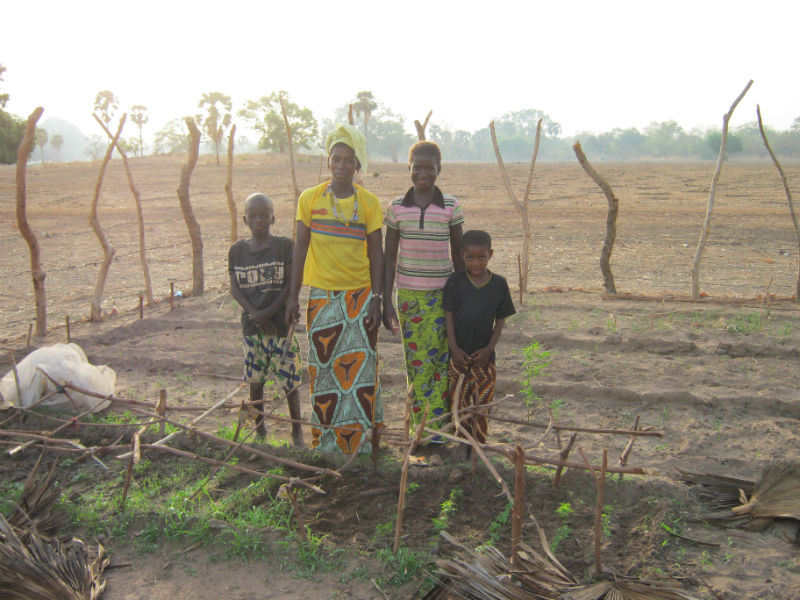 Distributing water to vegetable plots and tree saplings is another difficulty. The construction of a cement and plastic pipe water distribution system will cut down the time that villagers toil watering the community’s two gardens. Both are used to grow vegetables like tomato, onion, cabbage, pepper, pumpkin, roselle, eggplant, moringa, and pigeon pea, among other crops for village consumption. One of the gardens also includes an extensive tree nursery of gmelina, mahogany, mango, tamarind, orange, and papaya.

This project will construct a network of concrete reservoirs: one will receive water from the handpump and distribute it through pipes to two outlying reservoirs, one in each garden. This will significantly reduce the wait time and hardship of pumping and carrying water to each garden, giving women and girls more time to spend on other tasks. Moreover, creating a better watering system will increase the chances of higher and quicker yields, producing more food for consumption and better household nutrition.

Secondly, this project seeks to improve water storage for animal husbandry. Currently, one trough collects water from an aqueduct fed by the handpump. The trough is filled by some of the village boys every afternoon to water the cows the community tends as they return from their grazing areas by the river. At this point in the river, the water is saline, so the cows cannot drink from it.

The cows are watered only once a day from this handpump and trough. However, the trough can only hold a certain amount of water. When the thirsty cows come, they quickly empty the filled trough. The boys usually fill the trough once before women begin watering their beds–Cow watering time is the same time that women and girls water the gardens. 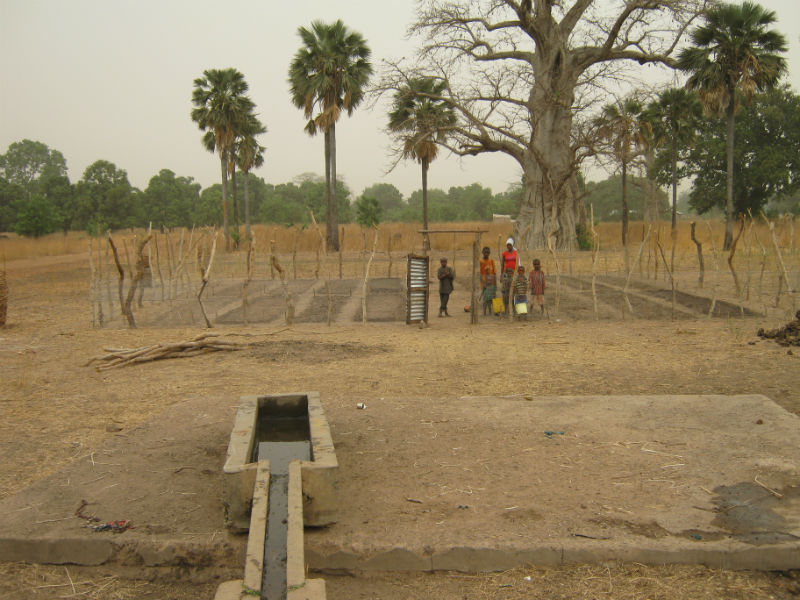 When the trough is emptied, the boys need to pump to refill it a second time for the cows. As cattle are the property of men, watering the cows is seen as a priority over the women’s need to water the gardens, which they own. So, the women must wait when the boys need to pump again and then wait for each individual woman to fill her pails and pans for water—a hugely inefficient use of time.

This project will double the holding capacity of the trough by building a concrete extension so the women won’t have to compete with cows for water.

Thirdly, this project aims to build 3-5 concrete showering platforms. The adults bathe themselves in reed-screened areas behind mud houses. But these areas have no flooring, so they used water pools, creating an unsafe environment for algae and bacteria. Creating concrete floors with re-bar supports and soak-away drains will give villagers more comfortable and hygienic places to shower.

Should any funds be left over, we will also construct a privacy wall for children to shower closer to the well. Children usually bathe themselves next to the well, but since there is no privacy wall, they feel exposed to passerby on the road. As a result, they shower quickly and improperly, contributing to common skin diseases. Giving children a proper bathing area will give them more dignity and allow them to better clean themselves.

Project Impact
39 people in Brikama Lefaya Village will directly benefit from the project. The site will serve as a model for more than five villages from which they can get inspiration and ideas for possible water and sanitation improvement projects.

Comments
This is a critical project for the villages, utilizing the most basic repairs to improve water distribution, sanitation, and hygiene.  This project was conflated with another of Jeremy’s projects for WC, and many of it’s objectives were completed as part of Central River Region Handpump and WASH Improvement Program – Phase 2 – The Gambia

All of Jeremy’s great work in The Gambia for Water Charity can be found here: The Gambia Lifewater Pump Repair Projects.

This project has been completed. To read about the conclusion, CLICK HERE.

To make a contribution for this project, please click the Donate button above.