This project has been completed under the direction of Peace Corps Volunteers Curtis Adams and Brittany Hill.

The project was to protect and develop the spring to eliminate exposure to contamination.

Water problems have always been a paramount problem for the people of Moldova. To this day the care and time spent on building and maintaining wells remains an honorable duty. The inhabitants of Boduresti are supplied with water from aqueducts, but are often without public resources to maintain the public and individual wells. This project has allowed for increased water sanitation.

The well produced by this project will be used as a source of drinking water and for the irrigation of agricultural crops.

In 2011, an initiative by the NGO AO Wisdom and the local mayor’s office launched a contest for the best decorated fountain. Many in the village participated (Bolduresti has special pride in its water, as one of the few communities located on a higher geographical plain than most communities in Moldova.) The winners were rewarded with cash prizes to further develop wells.

The student ecology club Ave Terra studied the nitrates in the water from 37 wells over three years. Taking water samples from each season, they concluded that some wells had better nitrate levels than others, often based on maintenance and well care.

After identifying the area with the greatest need the Ave Terra addressed the mayor and a specialist who identified the needed materials to build up a healthy natural spring water well reservoir.

After several discussions, the final plan resulted in the digging of a well reservoir with concrete pipes, a cement base, and a roof cover. The extra water stored could later be used as an aqueduct, storing 15 tons of water that could be used on a daily basis.

Initially, the project was going to be completed entirely by student labor but, the ecology club quickly realized they would need a specialist and more manpower to complete the construction. This extra labor was partially covered by the mayor’s office.

Water Charity funds were used for piping and installation.

The students of the ecology club painted the well and cleaned the area around the well. They have also planned a regimen for maintenance and cleaning in the future. Furthermore, in autumn, the club will clean the area and plant trees in the surrounding area of the well. The hope is that this further cleaning and maintenance will deter people from throwing trash or defacing the new well.

We are grateful to Curtis and Brittany for completing this great project. It exemplifies what can be accomplished in partnership with the community and local government by the addition of minimal financial resources. 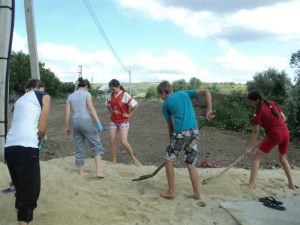 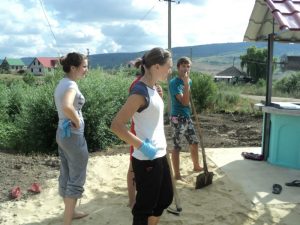