Chum Kiri is located 40 km from Kampot town, 150 km from Phnom Penh, and 12 km from National Highway 3. The majority of families survive on subsistence agriculture and, until recently, few had ventured outside of the district due to the decrepit road. 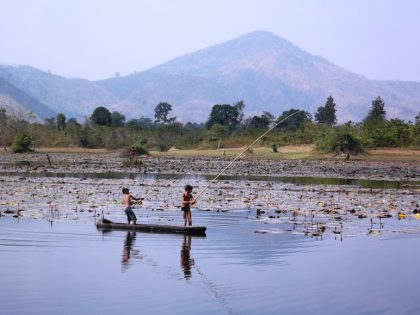 Within the past year, two massive road projects have greatly improved access to the district. This road improvement has opened many new opportunities for the district’s inhabitants.

One opportunity is easier access to Ang Chak High School. Attendance at the school increased by 8% in the 2012-2013 school year due to improved road conditions, with additional increases expected in following years as more people move into the district.

The school has 1,821 students. 80% are in grades 10-12, with the lower secondary students who also attend school on the property making up the remainder. There are 57 staff members, including 21 who live in dormitories on the school grounds.

Project Description
This project will install a new rainwater storage tank system, composed of 6 tanks, at the school.

The tanks will be made from readily-obtainable one-meter-diameter pipe sections stacked on end on a poured concrete slab. (These pipe sections are also used to build latrine tanks in the area and can be bought cheaply and easily.) The joints will be grouted to make waterproof tanks. 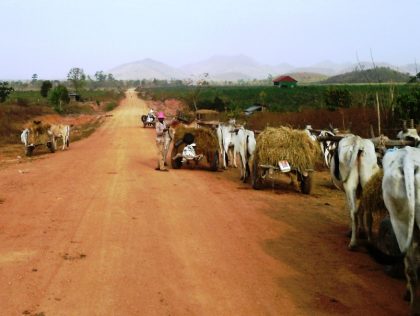 PVC piping will connect the tanks together at the bottom so that they make a single system. These tanks will be fed by supply pipes linked to the rain gutters of a school building. They will feed a system of small-diameter PVC piping that will run to various areas that need water and provide the head pressure to force water through this delivery system.

The rings will be 1 meter in diameter and 60 cm tall. Five of them will be stacked, making tanks that are 3 meters tall. Due to monetary constraints, only 6 tanks will be built at this time. However, the tanks will be positioned such that 6 more tanks can be added if/when more funds are obtained.

The total capacity of the system will be just under 15 cubic-meters (= 15,000 liters). The design accomplishes the specific purpose of supplying head pressure to the water delivery piping that feeds the latrines, garden, and other needs. It will save the labor previously need to carry water from the wells or unconnected cisterns.

The water will only need to be treated when it is used as drinking water. The school has two filtration jars for this purpose.

This type of system has proven effective in the past, and has been installed at most of the area primary schools by The Buddhist Library.

Appropriate Projects funds will be used to buy the cement, concrete pipe sections, PVC piping, and rain gutters, as well as for paying for the skilled labor.

Project Impact
1,821 students and 57 staff will benefit from the project.

Comments
This is an admirable project, using a technology not previously used for a Water Charity project. It achieves a clear financial advantage while building a system that is functional and long-lasting.

Dollar Amount Needed
$0.00 – This project has been fully funded through the generosity of Randy, Debi, and Ian Panke. Additional amounts have been donated by other friends and family of Peace Corps Volunteer Bruce Kelsey.