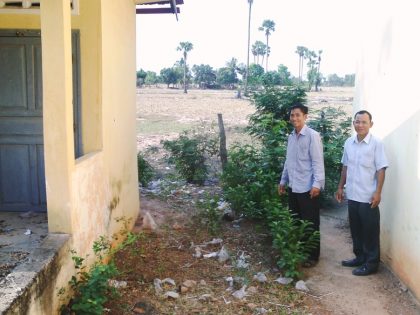 Community Description
Chum Kiri was founded in 1993, and is the newest and poorest district in the southern province of Kampot. It was one of the first areas captured by Khmer Rouge forces in the early 1970s and Pol Pot’s followers in the area did not accept re-integration under the peace plan until 1998.

Chum Kiri is located 40 km from Kampot town, 150 km from Phnom Penh, and 12 km from National Highway 3. The majority of families survive on subsistence agriculture and, until recently, few had ventured outside of the district due to the decrepit roads.

Within the past year, two massive road projects have greatly improved access to the district. This road improvement has opened many new opportunities for the district’s inhabitants. It has also brought many new people who want to settle in the area. This has placed a further strain on the already over-burdened schools. 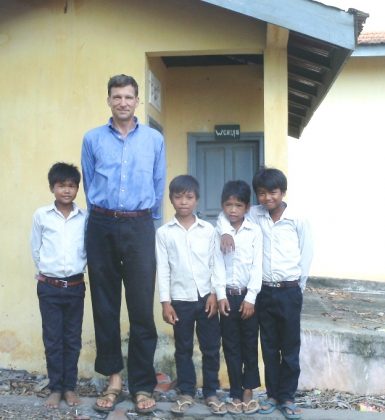 The Ang Andet Primary School serves 430 students. Its sanitation facilities are inadequate. In addition, the hand pump on the school’s well quit working prior to the school year, so they have been relying on a single well all year.

Project Description
This project is to expand the sanitation capacity at the school by adding an annex with two more toilets to the existing facility, and also to fix the hand pump on a well, at the Ang Andet Primary School.

The latrine annex will be constructed of stuccoed brick with a metal roof. It will have a tiled interior with ceramic toilet bowls.

Water will primarily be provided by cisterns that catch the rain runoff, supplemented by water from the school’s well when needed.

Unskilled labor, such as for digging the pit, will be contributed by the staff at the school and by local villagers. Brick, stone, and tile work will be performed by skilled masons who will be paid using Water Charity funds.

The school will contribute an additional $50 to $70, to be used toward the repair of the hand pump on the well. This will double the capacity of the water supply during the dry season.

Project Impact
430 students and 16 staff members, plus 150 villagers who depend on the wells during the dry season, will benefit from the project.

As of this posting, this breaks by three the record for the number of projects completed in partnership with Water Charity for a serving Peace Corps Volunteer.

This is an important infrastructure project to provide for the sanitation needs of the large school population. It incorporates widespread participation and careful design to extend the use of project funds to also satisfy an urgent water supply need.

Dollar Amount Needed
$0.00 – This project has been fully funded through the generosity of friends and family of Peace Corps Volunteer Bruce Kelsey.