This project has been completed under the direction of Peace Corps Volunteer Laura Fishman.

The project was to build an intake line from the new water source and connect it to the aqueduct.

As Fermín Moreno, the president of the Alto Limon aqueduct committee told me on Sunday, there is now water in Alto Limon day and night. One time, when I was visiting at his house back when we were still planning the project, a rare summer day when he did have water, he told me, “Me siento rico cuando hay agua en la casa,” a sentiment I fully understand, having water problems in my own house, and a statement which I happily remembered when he gave me this news on Sunday.

Not that there weren’t problems along the way. Some last minute additions to the materials list meant that we went $20 over budget and the Alto Limon aqueduct committee paid for this. Additionally, a two week agriculture seminar in Alto Limon started just as we received the funding from Appropriate Projects, so construction had to be delayed. 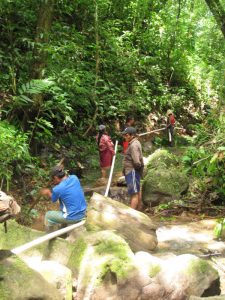 The spring intake we built is a low profile spring intake, built by first excavating back into the hillside to pinpoint all sources of water, then covering the entire area where water is (and potentially will be) flowing with large rocks, covering those rocks with smaller rocks to fill all cracks, and finally covering everything with a layer of cement. This design has many benefits over the spring boxes more commonly found in the area as it gets a better seal at the source, better preventing contaminants from entering at the intake and it does not disrupt the natural flow of water, and thus will not damage the water source. The disadvantage, however, is that people are not as accustomed to this design, so it is harder to communicate how to build it. Alfredo, the constructor, had once seen a low-profile spring intake, but he’d personally built multiple spring boxes.

There was much frustration the first day of construction due both to miscommunication and the high rainy season flow rate of our source (which is great for providing water day and night, but not so great for building a retaining wall). The people from the community who came to work spent most of their time sitting around while we worked through the problem of the high flow rate. Due to these problems it became hard to organize a second work day, and the constructor was left with the impression that the work would take another 5-7 workdays, which would be next to impossible to fit into the remaining time. 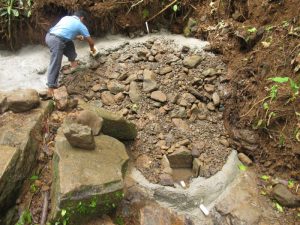 It wound up taking two more days of small amounts of work with a few community members, followed by three good workdays with great turnout from the community. I was exhausted by the end of it, but also very impressed with the community’s efforts. They had, with Fermín’s lead, even moved the stream over a couple feet, where they were afraid it might carry away the pipe when the heavy rains come.

On Sunday, I did of course remind Fermin that the true test will be to see how much water there is when summer comes and the rains stop. He told me I should call him from the U.S. next March and he’ll tell me how it’s doing.

We are grateful to Laura for completing this project, and again extend our thanks to Laura’s friends and family for providing the funding.