This project has been completed under the direction of Peace Corps Volunteer Allely Albert.

The project was designed to increase access of the people of Akid to potable water through the construction of a water system.

A summary of Allely’s report is as follows: 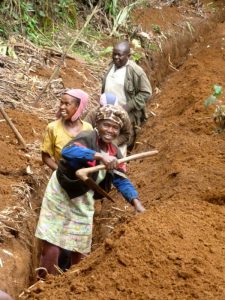 I found a European engineer who worked for a water organization. A local technician was hired to work under him to carry out formwork and cement work. The engineer surveyed the site and conducted various measurements and calculations. Based on his survey, he recommended a slightly different system than the Cameroonian had originally suggested. His plan involved a self-operated pump, powered by the force of the river, which would pump water to a slow sand filtration tank. The purified water would then flow into an attached storage tank, and the potable water would flow to the village to four separate stand taps via gravity.

The engineer visited the project site on weekends, and whenever his own schedule allowed. The first phase included clearing all of the pipeline and sites for digging and construction. Villagers cleared vegetation and other objects to make clear paths and marked it out.

Then they began digging pits for the storage tank and filter. Villagers dug a circular pit roughly 2 meters in diameter and 1 meter deep. The local technician with the assistance of villagers built the formwork for the tanks and began mixing concrete and pouring concrete. The villagers had to crack stones, carry stones, carry sand, and carry water to the site. They also cut and create wooden boards to be used in the formwork.

There was a long delay in purchasing and transporting sand to the village because of the conditions of the roads, which slowed the process. Eventually, the storage tank and filter were completed.

The engineer had planned to have a dam to divert water from the river. After several attempts at building the dam, it became clear it would not be feasible. The river was too powerful during the rainy season and storms repeatedly washed away the dam. The engineer eventually tried to work around that idea by collecting water from a smaller stream. This new catchment required a small pond to be built. The water was diverted to the stream, which was about 1 meter in diameter, where it collected, and was then diverted to the pump.

Shortly before the pipes were to be connected, the filter was made by creating layers of various sized sand and stones. The villagers had to collect stones and sand and sift them and categorize them by size. They then created the filter.

A local plumber was hired to help connect the pipeline. The engineer came to assemble the pump and connect it to the pipes and catchment pond.

The stand-taps were also built. Four of them were created at the four sites selected in the village. More concrete and its necessary components were collected. Around this time the engineer left Cameroon for several months and the project was on hold. After his return, all of the pipeline was laid and connected.

The engineer came out again to start the pump and complete the final touches of the system. The system started and the pump pumped water up to the filter, but then the pump stopped working. To date the problem has not been resolved.

I left Cameroon after completing my service. My replacement volunteer took over the project, and is now working with the engineer.

Community members were responsible for all labor, and participated by collecting and cracking stones, carrying and transporting materials, raising money, clearing land, and digging pipeline.

Community members greatly increased their technical skills in the construction field. Villagers learned how to mix concrete, how to construct framework, how to properly lay concrete, how to build a slow sand filter, how to construct a dam, how to connect and assemble pipeline, how to build stand taps, how to assemble the pump, how to use potable water for drinking/for cooking, about proper water sanitation, and about proper nutrition. They have been taught how to repair pipeline and certain aspects of the pump.

The water system should require relatively little maintenance and last a long time. Community members will have to clean the storage tank once per year and clean the filter when it collects too much debris, but other than that, there is not much work for them to do. They will have to monitor the system for any leaks or damages, but they have been trained how to repair those, and additionally have a local plumber who was involved with the construction of the system at their disposal.

Similarly, the community has been trained in all other aspects of system maintenance. They have been given tools, manuals, and a fund has been started in case any problems arise. They also have a functioning water committee. The pump is the only area that could cause trouble.

The community members show less faith with being able to deal with it, but have been shown which parts are capable of breaking down and how to replace them. The pump should also endure for an extensive period of time, once it is functional. We are additionally hoping to ultimately appeal to the Sub-Division Council so that the water system is placed under their jurisdiction and they will accept responsibility for its maintenance.

Community members are very passionate about the project, and are incredibly thankful for this work. They say that water is life, and that we are therefore giving them life. They named me the Mother of the Village in honor of the project. They say in the whole history of the village, water has never existed, but that we are helping change that. They are incredibly appreciative and anxious for the project to be over.

We are grateful to Allely for her work on this important and difficult project. We will update this report with new developments as we receive them from the new PCV who is addressing the outstanding issues. 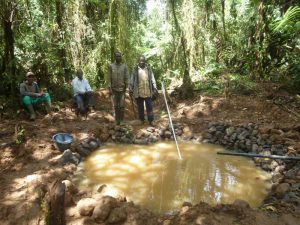 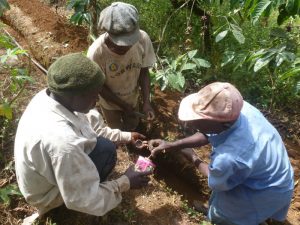 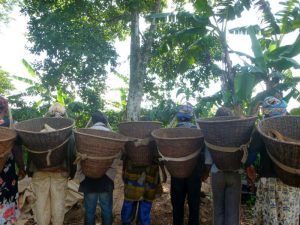 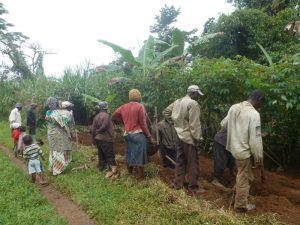